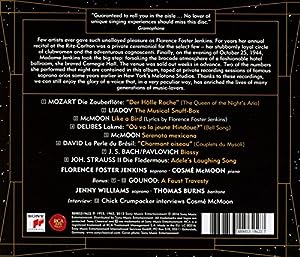 $3.91
As of 2020-09-28 19:38:34 UTC (more info)
Not Available - stock arriving soon
Buy Now from Amazon
Product prices and availability are accurate as of 2020-09-28 19:38:34 UTC and are subject to change. Any price and availability information displayed on http://www.amazon.com/ at the time of purchase will apply to the purchase of this product.
See All Product Reviews

In celebration of the worst opera singer of all time and in conjunction with the release of the biopic starring Meryl Streep and Hugh Grant, Sony Classical is happy to announce the release of The Truly Unforgettable Voice of Florence Foster Jenkins. In her time, Florence Foster Jenkins was a novelty in the history of music, an operatic coloratura who had all of the requisite charms and trappings worthy of a diva, minus the voice. Well entrenched in upper-crust New York society, after her divorce in 1912, "Madame" Jenkins, who had already been studying voice for some time, usually culminated her charity fundraisers with a sample of her singing. Jenkins' voice was high, scrawny, and seemed to have a mind of its own, warbling its way through difficult coloratura arias with the grace and control of an upright piano pushed down a spiral staircase. Well-heeled society types would attend Jenkins' recitals and patiently endure her auditory assault, along with enjoying a well-concealed chuckle or two at her expense. Jenkins' annual gala would remain a popular fixture in New York society for decades. At age 76, Jenkins finally achieved her lifelong dream of performing at Carnegie Hall's Recital Hall on October 25, 1944. A month after her Carnegie triumph, Jenkins collapsed and died in Schirmer's Music Store, her last words allegedly being "It must've been the creamed chicken."

The only professional audio recordings ever made of Jenkins consist of nine selections on five 78-rpm records (Melotone Recording Studio, New York City; 1941 1944). These include four coloratura arias from operas by Mozart, Delibes, Johann Strauss II, and Félicien David; the remaining selections are five art songs, two of them written for Jenkins by her longtime accompanist, Cosmé McMoon. The complete original recordings have been newly remastered for The Truly Unforgettable Voice of Florence Foster Jenkins which also includes bonus material and interviews with Cosmé McMoon.

only $1.71
Not Available
View Add to Cart