Flight of the Conchords [Vinyl] 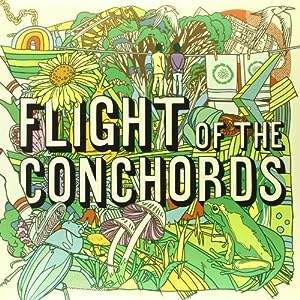 Flight of the Conchords [Vinyl]

$16.70
As of 2022-11-27 04:07:09 UTC (more info)
Not Available - stock arriving soon
Buy Now from Amazon
Product prices and availability are accurate as of 2022-11-27 04:07:09 UTC and are subject to change. Any price and availability information displayed on http://www.amazon.com/ at the time of purchase will apply to the purchase of this product.
See All Product Reviews

This acclaimed Kiwi novelty band follow the release of their six-track Grammy Award-winning CD EP "The Distant Future" with their full-length debut. Features fully fleshed-out and professionally recorded versions of the duo's concerts and TV favorites. Bret McKenzie and Jemaine Clement's trademark acoustic guitars lead the blitz, backed by a diverse array of instrumentation and production technique. If amazing, delightful, and hilarious is your idea of funny, then prepare for undisappointment. These fifteen songs pay homage to Pet Shop Boys, censorship, Marvin Gaye, sexism, Shabba Ranks, and backhanded compliments.

Anyone familiar with cultish comedy series Flight of the Conchords will be aware of the wonderful songs that the hapless New Zealand duo Bret and Jemaine concoct for each episode. Tackling all genres, from hip hop and soul to glam rock, the duo create highly original and well-produced tracks that typically satirise the very genre they're imitating. This album collects together many of the show's best musical moments, many of them subtly revamped. "Hiphopopotamus vs. Rhymenoceros" and "Boom" illustrate the pair's hilarious rap skills. "Think About It" parodies socially minded soul visionaries such as Marvin Gaye and Curtis Mayfield, "Bowie" satirises the 70s icon (especially his prodigious drug use), while "Inner City Pressure" mimics the Pet Shop Boys. Two of the most memorable songs from the series--"The Prince of Parties" and "The Most Beautiful Girl (In the Room)"--are also both present, making this the definitive FOTC compilation. The humour ranges from offbeat to downright daft, but there's nothing laughable about the production, which is mostly first class. It's true they could have given us a few new songs, but then how many comedy albums can you repeatedly rewind and find yourself not only laughing, but dancing too? -- Paul Sullivan

Drunk Texts to Myself