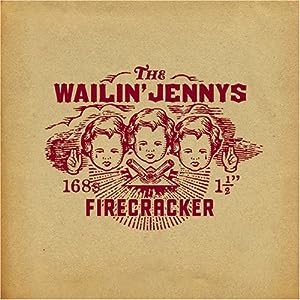 $10.00
As of 2022-01-16 17:11:35 UTC (more info)
Not Available - stock arriving soon
Buy Now from Amazon
Product prices and availability are accurate as of 2022-01-16 17:11:35 UTC and are subject to change. Any price and availability information displayed on http://www.amazon.com/ at the time of purchase will apply to the purchase of this product.
See All Product Reviews

Canadian trio the Wailin' Jenny's release their follow-up album to their successful 40 DAYS with FIRECRACKER.

When Winnipeg's Wailin' Jennys recorded their debut disc, 40 Days, back in 2004, their enthusiastic fan base--cultivated in part by significant airplay from CBC Radio One--provided the young group with a fast track to fame. Their fans' praise came first, critical acclaim arrived shortly thereafter, and a 2005 Juno for Best Roots & Traditional album soon followed. Surprisingly, as opportunities arose, founding member Cara Luft left the band, expediently replaced by Annabelle Chvostek. Thankfully, the Jennys' sound is none the worse for wear, even stronger in the respect that Chvostek's deft fiddle and mandolin playing helps to further uplift their melodies, while her warm alto adds a nice touch to the three part harmonies.

On this sophomore release, founding members Nicky Mehta and Ruth Moody continue in the tradition of writing songs independently, with each songwriter taking the lead on her own tracks. Moody seems to have the strongest songwriting sense: Listening to "Things That You Know" and "This Heart Of Mine" makes one yearn to hear the Dixie Chicks cover these tracks with the vocal strength and three-part power that the Wailin' girls do not have… yet. With a country edge and a Celtic lilt, Firecracker is an enjoyable listen, but those looking for edgy, O Brother-style country and alt-folk might find a better fit seeking out Gillian Welch or the Be Good Tanyas. Roots fans looking to dip their toes into easy listening-style acoustic music, however, will find this to be a fine fit. --Denise Sheppard

Any Way, Shape Or Form