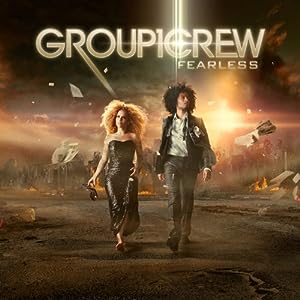 $5.30
As of 2022-11-29 22:31:38 UTC (more info)
Not Available - stock arriving soon
Buy Now from Amazon
Product prices and availability are accurate as of 2022-11-29 22:31:38 UTC and are subject to change. Any price and availability information displayed on http://www.amazon.com/ at the time of purchase will apply to the purchase of this product.
See All Product Reviews

Leading hip-hop sensation, Group 1 Crew, to release new album, Fearless, on Fervent Records September 11. The duo, comprised of Blanca Callahan and Manwell Reyes, had a hand in writing or co-writing all of the 13 tracks on the album. Their first single from the album, “He Said (featuring Chris August),” went to No. 1 on Christian CHR chart, is currently at No. 9 on Christian AC chart and sits in the Top 10 on Billboard’s Christian Songs chart.

“Group 1 Crew has been through so much in these last two years and I truly feel that all of the experiences and emotions from that period are captured in every track on Fearless. Whether it was marriage, loss, transition in our group or new beginnings, all of them had a part in this new album. God has shown me in this chapter of life that no matter what the journey may look like, He is there and will never leave me or forsake me. So as I continue on this journey of life, I’ll strive more and more each day to live Fearless,” Blanca comments. “In making this record, we dug deep into the God of our universe and found that he had us exactly where he wanted us, even if we couldn’t see it. He was telling us we had nothing to fear. So we made a record that reflected that exact revelation: Fearless,” added Manwell.

As noted by Blanca and Manwell, the title and theme of the record, Fearless, arose from a turbulent period for the group. While creating the album, they faced numerous challenges including evolving from a trio to a duo, the passing of Blanca’s father and learning how to balance newlywed life with a heavy touring schedule. Blanca and Manwell confronted these tests and have emerged stronger than ever before. Fearless takes fans on a lyrical journey through the truths that they faced over the past couple years. The title track, declares the message Group 1 Crew wants to convey on this album, “if You’re with me, who can be against me? I have no reason to fear.”

While the group takes the lyrical content to new depths, they also remain true to their signature rap, hip-hop and dance-infused style. Songs like “Freq Dat,” “Night of My Life,” “Goin Down” and “Dangerous” prove club-worthy with their great beats and unforgettable hooks.

July 16, Group 1 Crew will also be unveiling their new video for their hit song “He Said (featuring Chris August),” on Air1.com exclusively for 24 hours. The video will be made available on their website at group1crew.com and other online outlets starting July 17.

only $7.52
Not Available
View Add to Cart