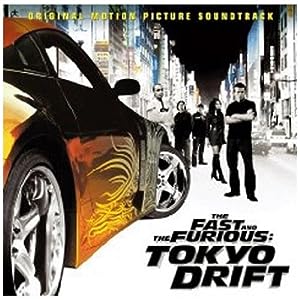 $8.46
As of 2022-12-03 15:17:30 UTC (more info)
Not Available - stock arriving soon
Buy Now from Amazon
Product prices and availability are accurate as of 2022-12-03 15:17:30 UTC and are subject to change. Any price and availability information displayed on http://www.amazon.com/ at the time of purchase will apply to the purchase of this product.
See All Product Reviews

The latest installment of the adrenaline-inducing series built on speed The Fast And The Furious: Tokyo Drift will definitely bring the summer heat. The cast this time around includes: Lucas Black, Bow Wow, Brian Tee, Sung Kang, Jason Tobin and Nathalie Kelly. No Vin Diesel or Paul Walker. Director Justin Lin opted for a more underground feel, with some lesser known, equally, if not more talented actors to tell the story of the Japanese version of drag racing called Drifting. The main character in the film, Sean Boswell, is a juvenile delinquent who destroys a housing development. In order to avoid a prison sentence, he's shipped off to Japan to live with his estranged father, and it takes all about a day before he's introduced to the underground drift-racing scene by a fellow American buddy, by the name of Twinkie, played by Bow Wow. An explosive series of events is set in motion, climaxing with an ultimate high stakes face off when Sean falls for the girlfriend of a local champ by the name of Drift King.

This soundtrack serves up a collision of musical styles, as if the coolest radio stations of Tokyo and New York had suddenly melded into a giant hybrid. The Teriyaki Boyz' opening title track is typical: brilliant production by the Neptunes, East-meets-West mood, more hipness than you can shake a stick at. The Japanese hip-hop group's other offering here, "Cho Large," isn't quite as good but fortunately it's the rare lame-ish track on a CD that overall keeps things on overdrive. Highlights include DJ Shadow's collaboration with Mos Def, "Six Days (Remix)"; Japanese girl surf experts 5.6.7.8's (already familiar to Kill Bill fans) and their uproarious "The Barracuda"; Evil Nine's "Restless," which has the kind of monstrous bass line the Chemical Brothers would kill for; and Atari Teenage Riot's awesome display of digital-hardcore aggro, "Speed" (have these guys ever been used in Dance Dance Revolution?). Even a reggaeton track like Don Omar's "Conteo" somehow fits in this universe, fueled as much by gasoline as by testosterone. --Elisabeth Vincentelli

SOUNDTRACK THE FAST AND THE FURIOUS: TOKYO DRIFT

The Harder They Come [LP]

Voice of the Xtabay / Inca Taqui