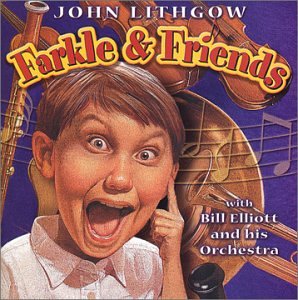 $29.31
As of 2021-06-19 21:51:07 UTC (more info)
Not Available - stock arriving soon
Buy Now from Amazon
Product prices and availability are accurate as of 2021-06-19 21:51:07 UTC and are subject to change. Any price and availability information displayed on http://www.amazon.com/ at the time of purchase will apply to the purchase of this product.
See All Product Reviews

One listen to Farkle & Friends confirms what anyone who caught an episode of TV's 3rd Rock from the Sun might've suspected: Not only is John Lithgow a born entertainer, the kind who gives off a great big whiff of Broadway no matter what stage he's tripping across, he's also curiously more kid than grown-up. Farkle, named for Lithgow's bestselling 2000 book about a musical child prodigy who tosses aside one instrument after another, whirls kids 2 and up (plus their parents) around a nine-song playground of Danny Kaye-inspired kookiness. "Marsupial Sue"'s rhyming-couplet lyrics hop alongside the titular kangaroo on her quest to escape a bouncy existence that "rattles her brain and gave her migraine"; "I Got Two Dogs" trails Fanny and Blue ("Betcha wish you had two dogs, too") and begets some of the most uproarious human barking and baying since Scooby-Doo; and "Carmencita" surveys the skies for a legendary damsel who twirled and tangoed till the dance floor launched her heavenward. Lithgow's five originals pack a delightful wallop weird enough to render the other tunes--such as a perfectly fun duet of Leonard Bernstein's "The Wrong Note Rag" with Bebe Neuwirth --playful piffle, but even the piffliest track, opener "Animal Crackers in My Soup," benefits from the full-orchestra treatment. Swing revival superstar Bill Elliott ("Independence Day," "Introducing Dorothy Dandridge") brings it on with gusto to match the singer-actor-author's guffaw-generating delivery. That Lithgow has barnstormed the kids' corner of the entertainment field should surprise no one and, in a perfect world, would send parents stampeding to his concert performances. More than anything, Farkle fuels a sense that Lithgow for little people should've happened a lot sooner. --Tammy La Gorce

only $5.55
Not Available
View Add to Cart