Fantastic Four - The Album by Wind-Up 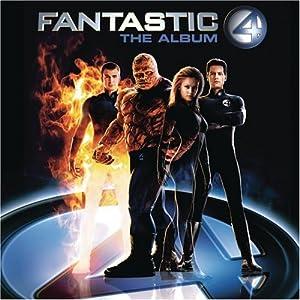 Fantastic Four - The Album by Wind-Up

$4.99
As of 2021-05-03 22:21:28 UTC (more info)
Not Available - stock arriving soon
Buy Now from Amazon
Product prices and availability are accurate as of 2021-05-03 22:21:28 UTC and are subject to change. Any price and availability information displayed on http://www.amazon.com/ at the time of purchase will apply to the purchase of this product.
See All Product Reviews

Description of Fantastic Four - The Album by Wind-Up

We are proud to stock the brilliant Fantastic Four - The Album.

With so many on offer recently, it is good to have a brand you can trust. The Fantastic Four - The Album is certainly that and will be a great purchase.

For this price, the Fantastic Four - The Album is highly respected and is a popular choice for many people. Wind-Up have included some nice touches and this means good value.

There are four good reasons to pick up the Fantastic Four soundtrack. The first three are kinda buried in the middle of the CD--and they all happen to be new songs. First, there's "I'll Take You Down," a nifty rocker by a combo called T.F.F. Never heard of them? They're an ad hoc supergroup featuring the Distillers' banshee Brody Dalle, Yeah Yeah Yeahs' guitarist Nick Zinner, the Datsuns' singer-bassist Dolf de Datsun, and Jet's drummer Chris Cester. Second, Joss Stone's "Whatever Happened to the Heroes" is a lot better than its obvious title suggests; it's a rollicking, old-school rock-soul track namedropping Joe DiMaggio (a hero in Stone's native Devon?) and Marilyn Monroe. Finally, there's "Everything Burns," which sees former Evanescence guitarist Ben Moody collaborating with Anastacia on his first solo outing. It looks like an odd-couple combination but somehow it works--probably because Moody knows how to write bombastic power ballads. (It's certainly less icky than "Hero" from Spiderman.) The fourth good reason is the very last track: "Kirikirimai" is a hyperactive rock/hip-hop hybrid that introduces Japanese band Orange Range to the American market. The rest of the CD, which mixes new tunes and recycled ones, is surprisingly solid with muscular but melodic contributions from Velvet Revolver, Sum 41, Simple Plan, and Lloyd Banks's infectious "On Fire." Just try to get its organ riff out of your head. --Elisabeth Vincentelli

His Band And The Street Choir (Expanded ...