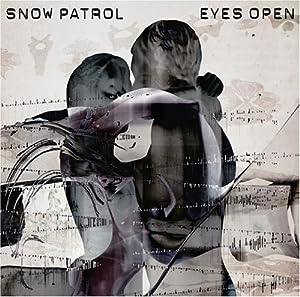 $5.95
As of 2023-01-24 23:23:11 UTC (more info)
Not Available - stock arriving soon
Buy Now from Amazon
Product prices and availability are accurate as of 2023-01-24 23:23:11 UTC and are subject to change. Any price and availability information displayed on http://www.amazon.com/ at the time of purchase will apply to the purchase of this product.
See All Product Reviews

Description of Eyes Open by A&M

We are happy to stock the brilliant Eyes Open.

With so many available right now, it is good to have a brand you can trust. The Eyes Open is certainly that and will be a superb buy.

For this great price, the Eyes Open comes widely recommended and is always a regular choice amongst most people. A&M have provided some excellent touches and this results in great value for money.

Snow Patrol release their eagerly awaited 4th studio album 'Eyes Open' on May 1st. Following the 4 x platinum success of their breakthrough record 'Final Straw', the band have made a phenomenal leap forward in every sense with their new album. With a lifetime of experiences accumulated over the last 2 years, including touring with U2, playing at Live8 and becoming one of the biggest bands in the country "Eyes Open" is a song writing tour de force, and takes the band to a whole new level. Highlights include first single 'You're All I Have" (released on April 24th), the huge and anthemic 'Chasing Cars", first debuted on the U2 tour and the staggering heartbreak of "Set The Fire To The Third Bar", a duet with Martha Wainwright.

Snow Patrol are frequently compared to Coldplay in the press, which seems strange as they write far better songs and do not appear to be quite so self-hating, nor as rich. Their delightfully dour little pop songs do touch on the melancholic side of things, but the lyrics are wonderfully slice-of-life descriptions. Singer/lyricist Gary Lightbody gives a shout-out to Sufjan Stevens when on the punchy "Open Your Eyes" he sings, "The anger swells in my guts." Perhaps a better comparison would be American indie-rock act Sebadoh? Regardless, this band continues to surprise. If you went to see this mixed Scottish/Irish group on tour after hearing their wistful, breakout third album Final Straw, you might have been a bit confused by the rock juggernaut confronting you. Eyes Open is their most straightforwardly rock record yet, and thanks in large part to producer Garret Lee, it's their best. If there was ever perfect music to get lost to while driving around confused about a relationship, this is it. --Mike McGonigal

Trouble Will Find Me