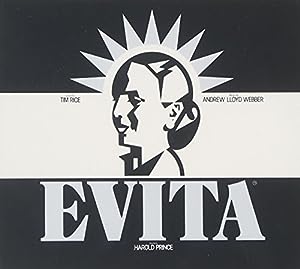 $35.98
As of 2021-03-06 17:16:42 UTC (more info)
Not Available - stock arriving soon
Buy Now from Amazon
Product prices and availability are accurate as of 2021-03-06 17:16:42 UTC and are subject to change. Any price and availability information displayed on http://www.amazon.com/ at the time of purchase will apply to the purchase of this product.
See All Product Reviews

Tim Rice and Andrew Lloyd Webber's Evita, which began as a concept album in 1976 and had its first stage incarnation in London in 1978, finally came to the U.S. in 1979 with a production that opened in Los Angeles and moved to San Francisco for multi-week engagements before landing on Broadway on September 25 to begin a Tony-winning, 1,568-performance run. The London production had been represented by a one-disc highlights album, but this one became the second full-length treatment, running, like the concept album, 100 minutes. As such, the revisions made for the stage were more apparent, especially because there were more of them than there had been in London, sometimes to Americanize the language. ("The back of beyond" in "Eva and Magaldi" became "the sticks," while "Get stuffed!" in "Goodnight and Thank You" was now "Up yours!") "The Lady's Got Potential" had been deleted, and there was a new song, "The Art of the Possible," which, with its musical-chairs staging, was more effective in the theater than on record. And "Dangerous Jade" had been revised to become "Peron's Latest Flame." Many of the changes built up the role of Evita's critic, Che. As played by Mandy Patinkin, who achieved Broadway stardom in the role, Che now rivaled Evita as a musical presence, the actor's elastic tenor and bravura manner drawing more attention to him. But Patti Lu Pone also became a star here, fearlessly bringing out Evita's strident self-interest without attempting to gain the audience's sympathy. (You couldn't say that about London's Elaine Paige.) Lu Pone was at her best when Evita was at her worst, such as in the songs "A New Argentina" and "Rainbow High." The rest of the cast was unexceptional, though Bob Gunton's Juan Peron inspired curiosity as the only actor to use a Spanish accent. ~ William Ruhlmann Music and words written by Andrew Lloyd Webber and Tim Rice 2 CD Set. Broadway Cast Original cast includes: Patti LuPone, Bob Gunton, Mandy Patinkin.

Evita was Andrew Lloyd Webber's last show with Tim Rice before he went on to projects with less interesting collaborators, so it's no surprise that it remains his most consistently involving and rewarding work. Loosely based on the life of Eva Peron, the charismatic wife of post-World War II Argentine president Juan Peron, Rice's compelling story of one woman's rise from poverty to power is complemented by Lloyd Webber's colorful music as propelled by vigorous Latin rhythms. The showstopper, of course, is "Don't Cry for Me, Argentina," but the score is full of gems, including "On This Night of a Thousand Stars," "Oh, What a Circus," and "Another Suitcase in Another Hall." Headlining the 1978 Broadway cast, Patti LuPone is fabulous in the title role, showcasing her big voice and brash egotism in the role she was born to play. Mandy Patinkin is Che, the Greek-chorus character commenting on and criticizing the Perons, and his tenor is sweet on the ballads and powerful on the driving numbers. LuPone and Patinkin made their names with Evita (and took home well-deserved Tonys), but it's the third principal, Bob Gunton, who elevates this cast to the stratosphere. As Peron--a role often filled by a nonsinger--Gunton inflects his strong voice with both menace and sensitivity. Forget the movie; this is the definitive version of this score, and an essential cast recording. --David Horiuchi

Joseph and The Amazing Technicolor Dream...

Songs of the West, Volume One