Everyone Is Here by Nettwerk Records 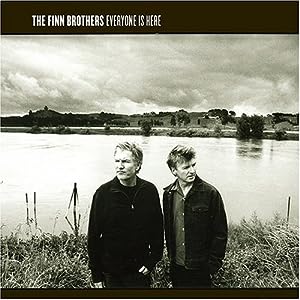 Everyone Is Here by Nettwerk Records

$7.00
As of 2021-09-16 03:15:05 UTC (more info)
Not Available - stock arriving soon
Buy Now from Amazon
Product prices and availability are accurate as of 2021-09-16 03:15:05 UTC and are subject to change. Any price and availability information displayed on http://www.amazon.com/ at the time of purchase will apply to the purchase of this product.
See All Product Reviews

Description of Everyone Is Here by Nettwerk Records

Top40 Music Store are delighted to present the famous Everyone Is Here.

With so many available today, it is great to have a make you can trust. The Everyone Is Here is certainly that and will be a perfect acquisition.

For this price, the Everyone Is Here is widely respected and is a regular choice with most people. Nettwerk Records have provided some nice touches and this means great value for money.

That day: Tim and Neil Finn flew in from New Zealand to record a new album. Friends and allies were called in to help as the album grew from Piha Beach to London and Los Angeles. In the engine room there's Matt Chamberlain (David Bowie/Macy Gray) on drums and Sebastian Steinberg (Soul Coughing) on bass; Jon Brion (Grant Lee Phillips/Fiona Apple/Badly Drawn Boy) appears on guitars, keyboards and face scratching. Mitchell Froom (Crowded House/Phantom Planet) lent his production skills. Bob Clearmountain was called in to mix, and it was the first time the Finns, Froom and Clearmountain had been in a room together since Woodface. At the heart of the project are these 12 new songs, as fine as anything the brothers have written. "Mitchell Froom was someone we'd spoken about in terms of keyboards; maybe getting him to play on a couple of things," Tim says. "We saw him soon after we came to LA. We played him material and I'll never forget it. In the space of a few hours he gave very precise opinions on every song. He became a producer on the project, but it was more like a friend helping out two other friends, with great authority and intuition. He knows us both so well. He's worked with both of us individually and together. He's creates this great level space." Everyone Is Here offers an intense emotional journey. "It involves a recurrence of ideas," Tim explains of the magic. "It's about embracing the simple classic elements that you've always loved."

Ever since the demise of New Zealand popsmiths Crowded House back in the late '90s, brothers Neil and Tim Finn have been content to plough their furrow far from pop's bustling farmstead. Everyone Is Here, the pair's second full-lengther, lacks the full production and grand, Beatlesesque melodic ambitions that saw songs like "Weather With You" and "Fall At Your Feet" become transatlantic radio hits--but it replaces such scope with a smudged, intimate acoustic style that suits Neil and Tim's songwriting talents almost as neatly. The album's finest moments are mostly placed towards the top end: "Luckiest Man Alive" is the sort of conscious rock gospel that Stereophonics' Kelly Jones would kill to be able to write, while "Anything Can Happen"--a billowing, U2-style epic of scintillating guitar and cavernous drum-crashes is seemingly placed to prove that not all is trad chez Finn. As an album, it probably won't spawn any MTV-hogging video classics--certainly, that was never the intention--but Finn fans in search of a mellow listen should find Everyone Is Here hits all the right buttons. --Louis Pattison

only $9.84
Not Available
View Add to Cart