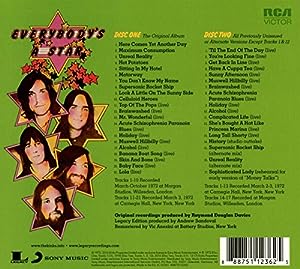 $9.98
As of 2020-09-22 17:54:18 UTC (more info)
Not Available - stock arriving soon
Buy Now from Amazon
Product prices and availability are accurate as of 2020-09-22 17:54:18 UTC and are subject to change. Any price and availability information displayed on http://www.amazon.com/ at the time of purchase will apply to the purchase of this product.
See All Product Reviews

First released in August 1972, Everybody's In Show-Biz was The Kinks' tenth studio album, arriving within a year of the acclaimed Muswell Hillbillies (the group's debut album for RCA Records). The original double-LP Everybody's In Show-Biz contained a complete studio album (which premiered the all-time Kinks classic "Celluloid Heroes" among other tracks) and a live disc chronicling The Kinks' Carnegie Hall appearance in March 1972.

The new Legacy Edition of Everybody's In Show-Biz includes the original double album in its entirety alongside a third LP with previously unissued studio sessions outtakes (recorded for the album in 1972) and live material (recorded March 2-3, 1972 during The Kinks' triumphant Carnegie Hall concert run).

only $6.72
Not Available
View Add to Cart

only $9.30
Not Available
View Add to Cart