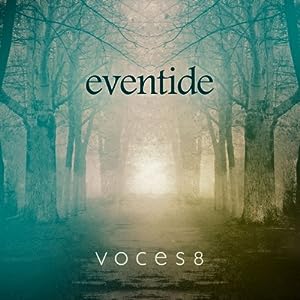 $12.37
As of 2022-12-02 05:55:40 UTC (more info)
Not Available - stock arriving soon
Buy Now from Amazon
Product prices and availability are accurate as of 2022-12-02 05:55:40 UTC and are subject to change. Any price and availability information displayed on http://www.amazon.com/ at the time of purchase will apply to the purchase of this product.
See All Product Reviews

The nineteenth-century American poet, Freeman E. Miller, offers us a beautiful interpretation of Eventide. A time for reflection, for peace and for comfort; VOCES8 explores this depiction with an album of musical repose.
Plainchant has, for centuries, adorned the cloisters of churches and cathedrals. The Festal and Pentecostal plainsong tones of Te lucis ante terminum, which open and close this disc, are surrounded with a gentle choral accompaniment, complemented by a plaintive saxophone solo. The enchanting melodies of Quanta qualia and Reflexionem also bear many of the facets of plainsong. Set to Latin texts, Patrick Hawes writes captivating scores that envelop the listener in the choral sound.
The poem Eventide by war poet John McCrae was the inspiration for our performance of Hymn to the Fallen. Written by the American composer John Williams for the film Saving Private Ryan, the soprano line sails above a rich chordal texture. Eric Whitacre has chosen poetry from Kipling s story The White Seal for the Seal Lullaby. Set for harp and VOCES8, the textures ebb and flow with subtlety and grace. In O magnum mysterium by Morten Lauridsen the music captures a similar fluidity as it rises and falls with adoration for the Christ child.
It was the sight of the sun setting on Alaska s Mount McKinley that inspired Ola Gjeilo s Second Eve. Towering chordal structures befitting the might of the mountain eventually soften with the evening light, as an alto voice cuts through the texture with a solitary chanting figure, hailing Amen and bringing the glorious day to an end.
Franz Biebl was a German composer incarcerated as a prisoner of war in the US from 1944 to 1946. Originally written for a male chorus of firemen, the popularity of Ave Maria led to it eventually being reworked to include upper voices. Opening with the chanted first stanza of the Angelus , a Roman Catholic devotional prayer, Biebl writes the melody in the tenor part and uses the upper voices as an atmospheric descant chorus.
Amongst the contemporary repertoire on this album are two songs that have had success in the charts. Where I sleep and Underneath the stars have a hymnal character that VOCES8 developed in order to bring the songs into the a cappella sound world. Also hymnal in conception are the spiritual Steal away and the Benedictus by Karl Jenkins. Both display the delicate innocence of the voice; fragile melodies are nurtured by the soaring saxophone and compassionate cello.
Fragility is also the theme of Britten s setting of the Corpus Christi Carol. Receiving widespread attention from Jeff Buckley s arrangement, the text could be considered to be an allegory for the Eventide of Christ s life. During the final moments of the work, the ensemble extends to the extremes of its range, depicting Christ s glorious resurrection.
In Os justi Bruckner harnesses the German sound of the nineteenth century with a score that brings to mind the depth and richness of one of his symphonic masterpieces. Paul Mealor s setting of Locus iste bears many of the hallmarks of Bruckner s choral writing and closes with a stunningly set stanza of poetry by the contemporary Scottish poet Peter Davidson.
Barnaby Smith, Artistic Director, VOCES8

Church in the Wildwood by Bill Gaither &...