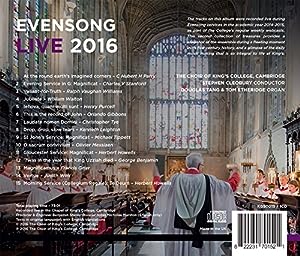 $43.08
As of 2020-09-22 06:07:13 UTC (more info)
Not Available - stock arriving soon
Buy Now from Amazon
Product prices and availability are accurate as of 2020-09-22 06:07:13 UTC and are subject to change. Any price and availability information displayed on http://www.amazon.com/ at the time of purchase will apply to the purchase of this product.
See All Product Reviews

Evensong Live 2016 is a selection of the best weekly webcasts recorded during the preceding academic year (14-15).

This album includes a selection of the best performances during the year, as selected by the choir's Director of Music, Stephen Cleobury. The choir at King's performs evensong six times a week, in addition to Sunday eucharist or matins, furnishing the liturgy with music on a daily basis. This tradition has fostered many of the greatest choirs, singers and organists in the world.

This selection of music provide a cross section of some of the everyday music making that happens at King's, capturing the atmosphere and acoustic of the Chapel. It serves as a snapshot of the choir at a specific moment in time, and presents evensong as one of the jewels of our national heritage. Not a relic, but a living and breathing part of our culture.