Escape to Paradise: The Hollywood Album 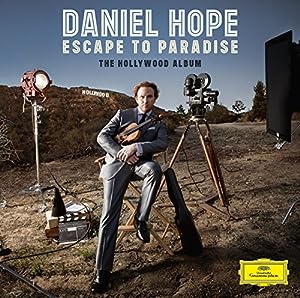 Escape to Paradise: The Hollywood Album

$10.31
As of 2021-04-15 23:04:49 UTC (more info)
Not Available - stock arriving soon
Buy Now from Amazon
Product prices and availability are accurate as of 2021-04-15 23:04:49 UTC and are subject to change. Any price and availability information displayed on http://www.amazon.com/ at the time of purchase will apply to the purchase of this product.
See All Product Reviews

In his latest album Daniel Hope shines a new light on Hollywood scores as he takes a widescreen musical journey, seeking out the echoes of exiled European composers, such as Miklos Rózsa, John Waxman, Hanns Eisler, Erich Wolfgang Korngold

The album also contains contemporary soundtrack classics such as Schindler´s List, American Beauty and Cinema Paradiso to reflect on the strong musical influence the Exile composer had and still has on contemporary film composers

Guest artists featuring on this record are no one less than Sting who performs in a new arrangement on The Secret Marriage a Hanns Eisler composition (originally with lyrics of Bertold Brecht, to which Sting wrote his own lyrics back in 1987) and German singer phenomenon Max Raabe on the famous speak Low by Kurt Weill

Escape to Paradise is both a historical and musical concept, curated by Daniel Hope, to a theme that he has personal associations for: his maternal grandparents fled Hitlers Germany for South Africa, and his parents then fled the apartheid regime for England