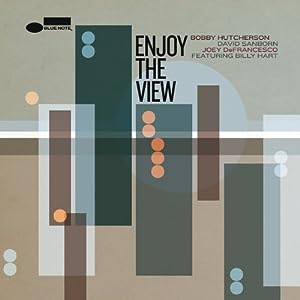 $12.61
As of 2022-11-27 19:35:19 UTC (more info)
Not Available - stock arriving soon
Buy Now from Amazon
Product prices and availability are accurate as of 2022-11-27 19:35:19 UTC and are subject to change. Any price and availability information displayed on http://www.amazon.com/ at the time of purchase will apply to the purchase of this product.
See All Product Reviews

NEA Jazz Master Bobby Hutcherson makes his triumphant return to Blue Note Records, where the virtuoso vibraphonist started his career in the early 60s, with the superb album, Enjoy the View. The vibrant session is produced by Blue Note president Don Was. Recorded by an all-star collective of saxophonist David Sanborn and organist Joey DeFrancesco, and featuring drummer Billy Hart, the Hutcherson-sparked group plays seven original compositions that range from cool, gentle grooves to fiery outbursts of exuberance. At heart, the album soars thanks to the divine musical alchemy among the performers an assemblage of veteran artists who play at the top of their game.

'I'm happy to have a recording come out on Blue Note,' says the 73-year-old Hutcherson. 'I've had a long-term association with the label. I'm thrilled to be back here.'

Was concurs: 'Bobby not only has an incredible history with Blue Note as the preeminent voice of the vibes, but he still remains the giant of the instrument.'
His stellar live quartet album Without a Net one of 2013 s top jazz albums Enjoy the View stands as a valuable addition to the classic catalog of the most-respected and longest-running jazz label in the world. 'Our goal has been to maintain the underlying aesthetic that has governed Blue Note throughout its 75 years,' says Was. 'It's very poetic to be doing it with the original guys who helped to define the label. For Bobby, it's more than coming full circle. It's also about guiding the course for the future.'

In the tradition of the Blue Note label, founded by Alfred Lion in 1938, a day of rehearsal was scheduled preceding the recording of Enjoy the View at Ocean Way Studios in Hollywood. Even though it was the first time Sanborn had played with Hutcherson and Hart, the chemistry was immediate. 'Don decided to have the rehearsal session recorded,' says DeFrancesco. 'It's a good thing because we decided that three of the tunes Dave s Delia and two of my new songs written for the date, Don Is and You were the best takes for the album.'

DeFrancesco proved to be the common denominator of the session, having played with Hutcherson for some ten years, with Sanborn and Hart, with whom he has enjoyed a long history, including his second album as a leader (1990 s Where Were You?). In New York when Was first came on board at Blue Note Records, after dinner he serendipitously dropped into the Blue Note club where DeFrancesco and Sanborn were performing. 'I'd known Dave for some 25 years and I knew Joey as one of the best Hammond B3 organ players in the world,' Was says. 'I just sat there and the set was so relaxed and grooving. I loved what I heard. So after the two sets, I met Joey upstairs and asked him what he thought about doing an album with Bobby and Dave. That s how it started.'

only $6.75
Not Available
View Add to Cart