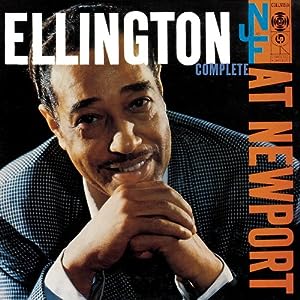 $15.54
As of 2020-03-28 12:39:50 UTC (more info)
Not Available - stock arriving soon
Buy Now from Amazon
Product prices and availability are accurate as of 2020-03-28 12:39:50 UTC and are subject to change. Any price and availability information displayed on http://www.amazon.com/ at the time of purchase will apply to the purchase of this product.
See All Product Reviews

Due to bad mike placement on stage, the original "live" album was actually a studio re-creation; the actual live performance was never issued-until now. This 2-CD set contains the complete original album and the hour-plus concert . More than 100 minutes of new music, and the whole thing's in stereo for the first time!

When Duke Ellington took his orchestra to the Newport Jazz Festival in 1956, the band was in need of an uplift, some humongous event that would revitalize its image in the wake of bebop, hard bop, and so many more jazz currents. Ellington got the lift he needed when he called "Diminuendo in Blue" with set-closer "Crescendo in Blue" tacked on the end. Tenor saxophonist Paul Gonsalves got the nod from Ellington to segue from "Diminuendo" to "Crescendo," and he blew doors. With one rousing 27-chorus solo, Gonsalves blew a fever into the crowd and jump-started Ellingtonia for another generation. Trouble with all this is that the living document of the Newport show is almost fully manufactured, recorded in a studio with crowd madness dubbed in. So this two-CD historical correction is an awesome addition to the centennial-era reissues on Columbia (including Anatomy of a Murder, Such Sweet Thunder, First Time: Count Meets the Duke, and Black, Brown and Beige). The producers revisited the Newport gig after four decades because they discovered an extant Voice of America tape--the one whose microphone Gonsalves blew his solo into, and the VOA tape catches the whole Newport set in its organic glory. Alternately tender with layers of brushstroke orchestration and blazing with the band's well-seasoned tightness, this new Newport is one for the generalist and the Ellington completist. It's got the revived original gig as well as the original commercial release. And they make great siblings, illustrative of the live-event charm and the music industry's dogged labors in reinventing it on record. --Andrew Bartlett

You Gotta Love the Life