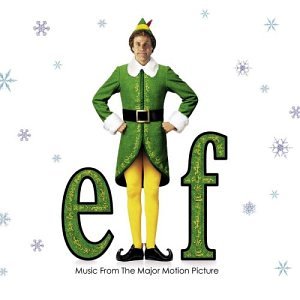 $11.98
As of 2021-04-16 17:55:44 UTC (more info)
Not Available - stock arriving soon
Buy Now from Amazon
Product prices and availability are accurate as of 2021-04-16 17:55:44 UTC and are subject to change. Any price and availability information displayed on http://www.amazon.com/ at the time of purchase will apply to the purchase of this product.
See All Product Reviews

This Jon Favreau-directed movie stars Will Ferrell as Buddy, a human raised in the North Pole to be an elf. After discovering he's really a human, Buddy heads to NYC to find his place in the world and to find his father. He not only finds his family, but he also manages to rekindle Christmas spirit in the city. Soundtrack includes songs by Louis Prima, Ferrante & Tercher, Ertha Kit, Brian Setzer, Ella Fitzgerald, Wayne Newton, Stevie Wonder, Billy Preston, Johnny Osbourne, Frank Sinatra, Ray Charles, Zooey Deschanel, and Leon Redbone.

It takes a pretty deft touch to make us believe towering Will Ferrell as a displaced human cum Santa's elf, Ed Asner as St. Nick and make a Christmas movie that's as loopy/sassy as it is seasonally sentimental. Yet that's what director Jon Favreau has done with this unlikely little holiday gem, and his hand-picked song score underscores its warm heart and comedic smarts with charm to burn. Suffused with a New York sense of traditional cool, Favreau turns his soundtrack into an upbeat secular Christmas classic, a sort of Swingers-Meet-Santa collection that convinces us that performances as diverse as Louis Prima's rousing take on "Pennies From Heaven" and the pumping soul of Billy Preston's "Nothing From Nothing" are as season-friendly as the performances of more traditional Christmas pop fare by Ella Fitzgerald, Jim Reeves, Eartha Kitt and Eddy Arnold they bookend. The edited Ferrante & Teicher/Les Baxter medley is a lounge-y inspiration, while a trio of laconic Leon Redbone crooners anchor the film's dizzy, if often bittersweet emotional foundations. Co-star Zooey Deschanel duets with Redbone on "Baby It's Cold Outside," her bluesy performance a welcome surprise that recalls nothing less than a young Peggy Lee. --Jerry McCulley

The Christmas Sessions by Mercyme Mercy ...

The Holiday Sounds of Josh Rouse