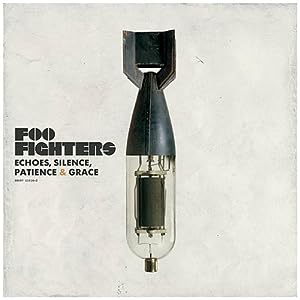 $7.27
As of 2023-02-03 02:04:40 UTC (more info)
Not Available - stock arriving soon
Buy Now from Amazon
Product prices and availability are accurate as of 2023-02-03 02:04:40 UTC and are subject to change. Any price and availability information displayed on http://www.amazon.com/ at the time of purchase will apply to the purchase of this product.
See All Product Reviews

With so many available these days, it is good to have a name you can trust. The Echoes, Silence, Patience & Grace is certainly that and will be a great buy.

For this price, the Echoes, Silence, Patience & Grace comes widely respected and is always a regular choice for lots of people. Rca have included some excellent touches and this equals great value for money.

Having commemorated their tenth anniversary with a year-plus run commencing with In Your Honor (a double album the New York Times called an "unexpected magnum opus"), sold out rock arena shows and a toned down intimate theater trek, and a headlining gig at London's Hyde Park for a crowd of 85,000, the question looms larger than any in the Foo Fighters' career to date: What do they do for an encore?!? The answer comes in the form of "The Pretender," the first single from the band's sixth studio album Echoes, Silence, Patience & Grace, out on Roswell/RCA. Produced by Gil Norton, who last worked with the band on 1997's double-platinum The Colour and The Shape (recently reissued in deluxe 10th anniversary form), Dave Grohl, bassist Nate Mendel, drummer Taylor Hawkins and guitarist Chris Shiflett have crafted a 12-track milestone that showcases and reconciles the band's every strength and sensibility in the most complex and confident Foo Fighters album to date.

In 1997, Foo Fighters teamed with alt-rock production cornerstone Gil Norton to make their best album, The Colour and the Shape. Ten years later, they've regrouped with Norton for a disc that's more sophisticated and diverse, if a tad less rockin'. The curveballs include "Stranger Things Have Happened," a solo soul-searcher where leader Dave Grohl's accompanied by just his acoustic guitar and a ticking metronome, and "Ballad of the Beaconsfield Miners," an acoustic guitar duet for Grohl and guest virtuoso Kaki King. Plus "Summers End" tickles the Foos' classic-rock fetish with a dead-on Crosby, Stills, Nash & Young arrangement. There's still enough of the intense, snarling power-pop that's Foo Fighters' longtime forte. "The Pretender," "Erase/Replace," and "Long Road to Ruin" combine sheer thrust, zeal, and melody like no other group currently on the charts. Yet the finale, "Home," makes its clear that this is a changed band--or, at least, that Grohl's a changed man. With only his piano for company, Grohl's pleading voice reveals fragile layers of insecurity and loneliness as he sings "all I want is to be home." Seems this rock & roll road warrior's mellowed some, albeit without compromising Foo Fighters' vitality. --Ted Drozdowski

Leave a Whisper by Atlantic / Wea

All Our Gods Have Abandoned Us