East of the River Nile 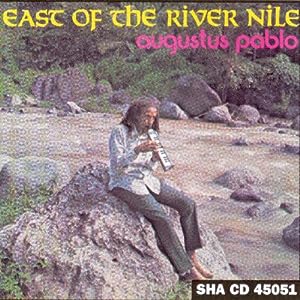 East of the River Nile

$49.95
As of 2020-09-25 21:54:43 UTC (more info)
Not Available - stock arriving soon
Buy Now from Amazon
Product prices and availability are accurate as of 2020-09-25 21:54:43 UTC and are subject to change. Any price and availability information displayed on http://www.amazon.com/ at the time of purchase will apply to the purchase of this product.
See All Product Reviews

As one of the creators of reggae dub music, the late Augustus Pablo is a legendary artist with a world-wide cult following that is unique and passionate. East of the River Nile, long out of print, is an acknowledged reggae classic, a "must have" for all serious reggae fans, world music lovers and electronica buffs.

The late Horace Swaby, a.k.a. Augustus Pablo, was one of the canonical figures of Jamaican reggae and dub music. From the moment he emerged on the scene as a teenager with his hit single "Java" to the classics he cut with his influential Rockers band and label, Pablo made the melodica, an obscure mouth organ of European origin, an indispensable part of the reggae sound. That instrument's piercing and poetic strains made this memorable out-of-print-classic, originally released in 1977 and rereleased in honor of its 25th anniversary, a marvel of sound and soul. Recorded in Lee Perry's legendary Black Ark Studio and mixed by the Scientist of Sound King Tubby, Pablo--who also plays keyboards--is backed by a first-rate band that includes Robbie Shakespeare on bass, drummer Aston "Family Man" Barrett, and guitarist Earl "Chinna" Smith. Pablo and company deliver a nondub instrumental album that serves as the syncopated soundtrack of the Rasta nation. Who could forget the minor-key Afro anthems "Chant to King Selassie I," "Natural Way," and "Jah-Light"? Along with shout outs from Perry, the Orb, and others, the CD also includes six bonus tracks and a never-before-heard version of the title cut. All told, Augustus Pablo's "Far East sound" is still with us. --Eugene Holley, Jr.

only $6.37
Not Available
View Add to Cart