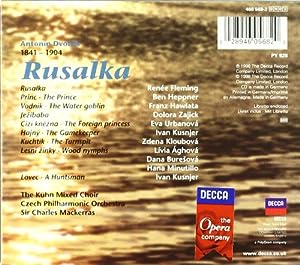 $29.00
As of 2020-09-08 21:56:08 UTC (more info)
Not Available - stock arriving soon
Buy Now from Amazon
Product prices and availability are accurate as of 2020-09-08 21:56:08 UTC and are subject to change. Any price and availability information displayed on http://www.amazon.com/ at the time of purchase will apply to the purchase of this product.
See All Product Reviews

All our books are brand new. We ship worldwide

Though Czech opera has often had questionable export value due to linguistic barriers, this first truly international recording of Dvorák's most viable opera--inspired by Wagner's love of mythology and Verdi's melodic drama--suggests that non-Czech artists can be more than just credible. As a water sprite who becomes human for love of a prince, Renée Fleming gives her best recorded performance so far with a dramatic heat and theatrical dimension (plus her customary vocal luster) that her Czech predecessors haven't always mustered. Ben Heppner is a robust-voiced prince, though this one- dimensional role doesn't inspire any special affinity from him. Dolora Zajick is a vivid, vocally commanding witch. The one substantial disappointment is Franz Hawiata as the leathery-voiced water goblin. Conductor Sir Charles Mackerras is less interested in creating surface excitement than in bringing out subtleties that help compensate for the composer's occasional lack of melodic precision, though the big moments are by no means slighted. --David Patrick Stearns

Bach: Mass in B minor

only $3.81
Not Available
View Add to Cart