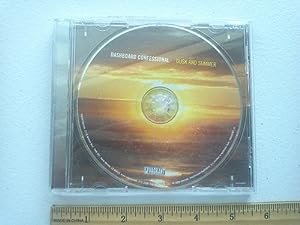 $1.69
As of 2023-02-03 02:04:01 UTC (more info)
Not Available - stock arriving soon
Buy Now from Amazon
Product prices and availability are accurate as of 2023-02-03 02:04:01 UTC and are subject to change. Any price and availability information displayed on http://www.amazon.com/ at the time of purchase will apply to the purchase of this product.
See All Product Reviews

We are happy to stock the fantastic Dusk & Summer.

With so many on offer today, it is good to have a brand you can trust. The Dusk & Summer is certainly that and will be a great acquisition.

For this price, the Dusk & Summer comes widely respected and is always a regular choice for lots of people. Universal Music have provided some nice touches and this equals good value for money.

Dusk and Summer is the long-awaited follow up to 2002's much heralded A Mark, A Mission, A Brand, A Scar. That album not only propelled Dashboard Confessional to near platinum sales, but also made the band's founder and front man, Chris Carrabba, a household name and face. Armed with an incredibly loyal fan base, DC will often sell out shows without tickets getting past the band's fan club. They are one of the few bands that have maintained a strong connection with their fans while growing well into a more mainstream audience. Dusk and Summer is the perfect next-level record for a band growing musically. Armed with the same brilliant lyrics you've grown to expect from Dashboard Confessional, Dusk and Summer is filled with huge, sweeping hooks and massive rock anthems. The bigness of these songs will be impossible to ignore and this is clearly the record needed to take Dashboard Confessional to superstar status.

It's all about the power chord and the sing-along chorus. With the exception of the stark title track, Christopher Carrabba's once-prominent acoustic strumming is now in short supply. Along with Scott Schoenbeck, John Lefler, and Mike Marsh, the Dashboard Confessional mastermind cranks it all up on his fourth full-length: the guitars, vocals, drums, the works. Consequently, some listeners have been tossing around the letter "U" and the numeral "2." It's a bit of a stretch, although the album was co-produced by Daniel Lanois of Joshua Tree fame (and mixed by Nevermind's Andy Wallace). The Florida outfit also opened for the Irish superstars in support of 2003’s A Mark, A Mission, A Brand, A Scar. That said, Carrabba is still the same earnest young man, just more amplified than before. Aside from "Dusk and Summer," quieter tracks include "Stolen" and the piano-driven "So Long, So Long," decorated with husky croons from Adam Duritz of the Counting Crows. But even these seem loud compared to Carrabba's stripped-down early material. It isn't a bad move, but like most stylistic shifts it's sure to send a few longtime fans packing, while making room for new ones who've never heard Dashboard Confessional before or who found the old stuff too whiny and angst-ridden. Well, there isn't much whining on Dusk and Summer--just a whole lotta (heartfelt) rockin'. --Kathleen C. Fennessy

only $4.58
Not Available
View Add to Cart