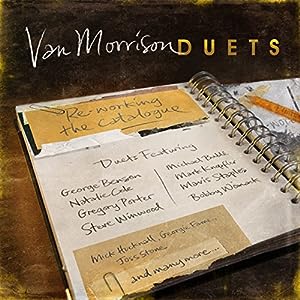 $5.69
As of 2022-11-19 00:16:28 UTC (more info)
Not Available - stock arriving soon
Buy Now from Amazon
Product prices and availability are accurate as of 2022-11-19 00:16:28 UTC and are subject to change. Any price and availability information displayed on http://www.amazon.com/ at the time of purchase will apply to the purchase of this product.
See All Product Reviews

On DUETS: RE-WORKING THE CATALOGUE, Van Morrison and the guests selected and recorded some of his songs from the catalog of 360 songs across his career. Deliberately steering away from his more well-known classics, Van enlisted some of the artists he most respects to perform these songs with him to re-craft and re-imagine them. The album was recorded in his home town of Belfast and London in the United Kingdom over the last year, using a variety of musicians and fresh arrangements.

Van Morrison is considered one of the most prolific recording artists and extraordinary live performers of our time. He has received a multitude of awards and accolades including 6 Grammy Awards, a Brit Award, an OBE, an Ivor Novello, and has been inducted in the Rock and Roll Hall of Fame. His visionary songwriting and mastery of many genres continues to shine on albums celebrating and re-exploring his blues, jazz, skiffle and country roots. With one of the most revered catalogues in music history, his talents as a composer, singer and performer are unmatched.

only $2.75
Not Available
View Add to Cart