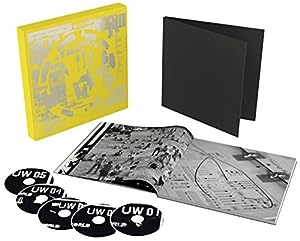 $149.98
As of 2021-04-15 07:50:01 UTC (more info)
Not Available - stock arriving soon
Buy Now from Amazon
Product prices and availability are accurate as of 2021-04-15 07:50:01 UTC and are subject to change. Any price and availability information displayed on http://www.amazon.com/ at the time of purchase will apply to the purchase of this product.
See All Product Reviews

To celebrate Dubnobasswithmyheadman's twentieth anniversary, the record has been meticulously remastered at Abbey Road for a deluxe reissue by the band's Rick Smith. Revisiting the original MIDI files, Rick uncovered a wealth of previously unreleased material and rare alternate mixes that sit alongside the record's original companion singles and remixes and offer a fascinating insight into the creation of the record. The resultant release is the definitive version of one of those rare records that truly deserves to be described as a classic.

Underworld's debut arrived as a fully formed statement of intent. Its' nine tracks showcased the limitless possibilities of electronic music. Although born out of club culture, Dubnobass… defied the accepted genres of the time - equally suited to the dancefloor and the after party, it was as immersive an experience quaking through bassbins or headphones. Two decades on from its original release, it's unarguable that Dubnobasswithmyheadman is one of the most influential British electronic records of all time; a signpost for everything from dance music's easy relationship with main stages at festivals to the radio/globe-conquering EDM phenomenon.

Other formats include Remastered 1CD; a 2CD Deluxe Edition; 2LP on 180 GM vinyl.