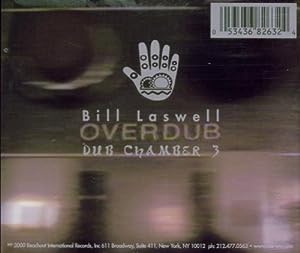 I will ship by EMS or SAL items in stock in Japan. It is approximately 7-14days on delivery date. You wholeheartedly support customers as satisfactory. Thank you for you seeing it.

Dub Chamber is the third chapter in bassist-producer Bill Laswell's Sacred System trilogy. Like its predecessors (Chapter One and, aptly, Chapter Two), Dub Chamber incorporates elements of ambient jazz, world percussion, and dub reggae. Two tracks, "Cybotron" and "Devil Syndrome," are constructed loosely around the central riff from Bob Marley & the Wailers' "Could You Be Loved." British bassist Jah Wobble lends his experimental postpunk imprimatur to the former, while on the later, jazz keyboardist Craig Taborn lays down some electric piano reminiscent of former Laswell client Herbie Hancock . Norwegian trumpeter Nils Petter Molvær adds an icy ECM vibe to "Beyond the Zero," and guitarist Nicky Skopelitis is also on hand. Yet, like so many studio productions that attempt to redefine dub apart from the immediacy of its original Jamaican context, it all adds up to something less than the sum of its parts. There's just no substitute for starting with a real song, even when the intent is sonic deconstruction. --Rick Mitchell