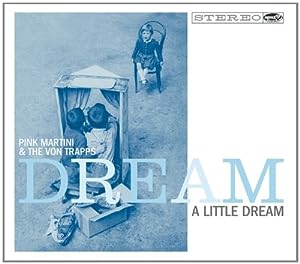 $16.98
As of 2022-09-27 07:06:35 UTC (more info)
Not Available - stock arriving soon
Buy Now from Amazon
Product prices and availability are accurate as of 2022-09-27 07:06:35 UTC and are subject to change. Any price and availability information displayed on http://www.amazon.com/ at the time of purchase will apply to the purchase of this product.
See All Product Reviews

Sofia, Melanie, Amanda, and August von Trapp are the actual great grandchildren of Baron & Maria von
Trapp, made famous by the 1965 film The Sound of Music. These siblings (ages 18 25) have been singing together for 12 years, and have toured all over the world in concert. Drawn into the magical
orbit of Thomas Lauderdale, they now live together in a house in Portland, Oregon and have been frequent guest performers with Pink Martini for the
past two years. This delightful new collaboration features Pink Martini s beloved little orchestra fronted by the beautiful crystalline four-part
harmonies of the singing siblings, traveling through a wonderland of Lauderdale s brilliant arrangements.

Fifteen songs from all over the world, from Japan, Sweden and Rwanda to France and Ireland.

In a duet that crosses the threshold of fantasy and reality, Charmian Carr (the actress who played Liesl in The Sound of Music) sings a touching version of Edelweiss.