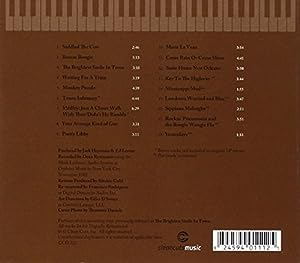 $12.99
As of 2022-06-21 01:30:38 UTC (more info)
Not Available - stock arriving soon
Buy Now from Amazon
Product prices and availability are accurate as of 2022-06-21 01:30:38 UTC and are subject to change. Any price and availability information displayed on http://www.amazon.com/ at the time of purchase will apply to the purchase of this product.
See All Product Reviews

In the summer of 1981, Mac Rebennack, a.k.a. Dr. John, a.k.a. The Night Tripper, walked into a New York City rehearsal studio to record his first solo piano LP. No band, no overdubs, no gris gris, no studio tricks, just Mac at the piano and at his very best. The results of these historic sessions were released on the small but highly respected jazz label Clean Cuts Records as "Dr. John Plays Mac Rebennack." Though no one at the time could have predicted that his first Clean Cuts session would mark the beginning of an exciting new chapter in Mac's long and varied musical career, Dr. John Plays Mac Rebennack was widely heralded by music critics and aficionados everywhere as one of the seminal touchstones of New Orleans piano style. From a full page of coverage in Time, to Record of the Month in Stereo Review, to Keyboard, Playboy, Rolling Stone, People and Billboard (the record spent considerable time on the Billboard Jazz charts) .... Everyone noticed! When a year passed and Mac's recording and solo performances garnered the highest praise, he returned to the same piano in Chelsea for his second solo date. This session, which yielded the album "The Brightest Smile In Town," is now re-released and re-mastered with the inclusion of six previously unreleased tracks as "The Legendary Sessions Volume Two." Clean Cuts Records is proud to present the second and final volume of solo piano recordings from one of the most gifted, singular and important American artists. Digipak. Clean Cuts. 2006.

The second of back-to-back solo albums cut in the early '80s, Dr. John Plays Mac Rebennack: The Legendary Sessions Volume Two (originally released as The Brightest Smile in Town) presents a more balanced mix of vocal and instrumental tracks than its predecessor, Dr. John Plays Mac Rebennack. While it's fun to hear the great New Orleans pianist romp through "Box Car Boogie" and patiently work his way through the twilight blues of "Pretty Libby," the unexpected treats are the best: a heartsick version of Jimmy Rodgers's "Waiting for a Train;" a Doc Pomus cover, "Average Kind of Guy," that sounds like Randy Newman on a particularly good day; and "Marie La Veau," a highly syncopated bow to one of the Crescent City's many voodoo queens. By the time Rebennack ends Brightest Smile with two gorgeous instrumentals--a lovely take on Harold Arlen's "Come Rain or Come Shine" and "Suite Home New Orleans"--you're reminded just how encyclopedic his knowledge of American music is. (The 2006 reissue adds six previously unreleased bonus tracks.) --Keith Moerer

The Life Of A Song

Music of My Mind

The Best Of Fats Domino