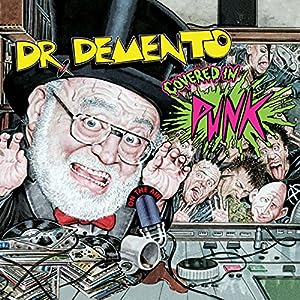 $17.54
As of 2021-03-05 17:39:54 UTC (more info)
Not Available - stock arriving soon
Buy Now from Amazon
Product prices and availability are accurate as of 2021-03-05 17:39:54 UTC and are subject to change. Any price and availability information displayed on http://www.amazon.com/ at the time of purchase will apply to the purchase of this product.
See All Product Reviews

Wind up your radio dementites and dementoids the doctor is in!

This extra-special two-hour demented punk extravaganza is an audio oddity unlike anything else! An eclectic mix of artists from the world of classic and contemporary punk/indie/alt-rock have assembled, along with special guest stars from film, TV and more, to pay homage to radio icon Dr. Demento (a world renowned institution who has championed novelty music and its creators since the 1970s), for this mind-blowing compilation. Over thirty different, never before released, all-new punk cover versions of mad music and crazy comedy songs famously heard on the airwaves of the legendary Dr Demento Show have been intermixed with wild card tracks showcasing some incredible, newly demented versions of punk-rock classics!

The result is a uniquely original, highly entertaining, modern day homage to Dr. Demento s classic radio show, and its undeniable impact on popular culture. This bizarro broadcast from beyond the fringe is hosted by Dr. Demento himself, offering up interesting factoids and anecdotes between songs, with celebrity guest ID spots, creatively crafted bumper segments, and more demented surprises tying it all together into an unconventional take on the traditional radio show format.

Over two-full hours, a total of 64 tracks all created specifically for Dr. Demento Covered in Punk !

Both the two-disc CD, or three-disc vinyl LP come with an equally entertaining full-color booklet jam-packed with extensive liner notes and quotes personally written by the artists, a foreword by producer John Cafiero (Misfits, Ramones, Osaka Popstar), an Afterword by Dr. Demento, as well as facts, photos, and an array of dynamic paintings and illustrations created specifically for the project by a team of visual artists spanning the world of comic books, classic punk-rock album covers, Topps Trading card series, Mad Magazine and more.

Joined by everyone from the Misfits, Joan Jett, Fred Schneider of the B52s, to Weird Al Yankovic, the late Adam Batman West (in one of his final performances), and Captain Kirk himself, William Shatner (to name just a few), the Doctor is in...and he's Covered in Punk !!

About Dr. Demento: The Dr. Demento Show has been celebrating mad music and crazy comedy on the airwaves playing everything from Spike Jones to Frank Zappa for nearly five decades. Responsible for introducing the world to its #1 most requested song of all time, Fish Heads, and launching the career of the most successful artist in the entire history of funny music Weird Al Yankovic; the world-famous Doctor s influence on pop culture has earned him induction into the National Radio Hall of Fame, a documentary feature film on his life and career currently in production, and even an appearance on The Simpsons.