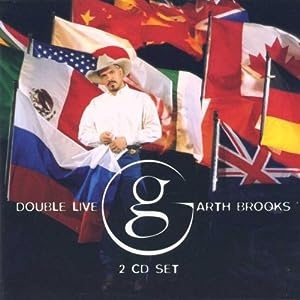 $8.43
As of 2022-09-18 12:20:07 UTC (more info)
Not Available - stock arriving soon
Buy Now from Amazon
Product prices and availability are accurate as of 2022-09-18 12:20:07 UTC and are subject to change. Any price and availability information displayed on http://www.amazon.com/ at the time of purchase will apply to the purchase of this product.
See All Product Reviews

Garth Brooks's obvious inspirations for Double Live were all those 1970s double-album concert recordings from album-oriented-rock influences such as Bob Seger, Kiss, and Peter Frampton. The difference between those classic-rock sets and this one is that Live Bullet, Alive and Frampton Comes Alive all helped to rescue their respective artists from virtual obscurity. Coming as they did from still largely unknown commodities, they seemingly promised nothing yet delivered everything. Already a superstar, Brooks merely promises more of the same on Double Live. He delivers, too. "You guys already know what's coming, don't you?" he asks at one point. "And you know what? You're right." Loaded with 22 hits (and three new tunes) recorded in any number of unnamed cities (and studios, too) over the past seven years, Double Live finds Brooks exaggerating his most irritating tics--the Wynnona-ish growls, the ridiculously elastic twang--in the process ruining even his finest songs. Still, even those convinced that Brooks is the Garth Vader of country music will be brought to pause as tens of thousands of admiring fans sing earnestly along to "The Dance" or "Unanswered Prayers," and scream their way through the anthem "Friends in Low Places." (Please note: You may receive any one of the album's six different covers.) --David Cantwell

Leave a Scar: Live in North Carolina by ...