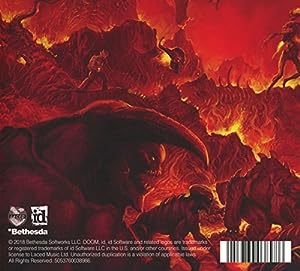 $11.55
As of 2023-01-31 12:49:26 UTC (more info)
Not Available - stock arriving soon
Buy Now from Amazon
Product prices and availability are accurate as of 2023-01-31 12:49:26 UTC and are subject to change. Any price and availability information displayed on http://www.amazon.com/ at the time of purchase will apply to the purchase of this product.
See All Product Reviews

The 2xLP was cut at the world famous Abbey Road Studios. The DOOM (Original Game Soundtrack) will be available in two formats at retail; a Deluxe Double CD in a triple gatefold sleeve including all 31 tracks from the game and a deluxe Double Vinyl with 20 favorite tracks selected by the developers pressed on 180g red vinyl and cased in a deluxe sleeve with full printed inner sleeves.

A true passion project, the recording process saw Gordon representing DOOMs portrayal of Hell through the role of energy in sound production, imparting the physical properties of analogue equipment onto digital sources.

To mimic the power of Hell and its curroptive Argent energy, Mick created the DOOM Instrument. Consisting of pure sine wave inputs directed into four separate sound processing chains and a variety of post-processing techniques, it allowed Gordon to dynamically corrupt generated sounds.

Further callbacks to the franchises legacy and imagery are found as the soundtracks signature screeching guitar lines are layered with the chainsaw audio from the original 1993 title.

only $4.67
Not Available
View Add to Cart