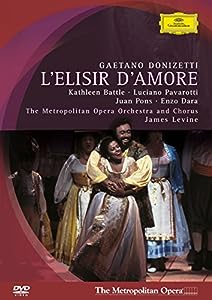 $24.98
As of 2021-02-28 22:06:29 UTC (more info)
Not Available - stock arriving soon
Buy Now from Amazon
Product prices and availability are accurate as of 2021-02-28 22:06:29 UTC and are subject to change. Any price and availability information displayed on http://www.amazon.com/ at the time of purchase will apply to the purchase of this product.
See All Product Reviews

It would be hard to imagine a better performance of Donizetti's comic masterpiece. If there was one role that ideally suited Luciano Pavarotti's voice and stage personality, it was Nemorino, the impoverished and not-very-bright peasant who worships the village's prettiest and richest young woman from a distance, is swindled by a traveling vendor of "miracle" medicines, but wins her hand by dumb luck. The story has comedy, pathos, and a put-down of Wagner's Tristan und Isolde (or at least the Tristan story) written long before Wagner composed it.

Kathleen Battle is not only a wonderful singer and convincing actress; as Adina, she is pretty enough to make Nemorino's infatuation totally credible. Juan Pons struts convincingly as Belcore, Nemorino's self-important rival, and Enzo Dara is properly spectacular as Dr. Dulcamara, who sells Nemorino the magic potion guaranteed to improve his love life, or at least to get him drunk. The melodies in this opera include some of the best ever written, and James Levine, his extraordinary orchestra, and his wonderful chorus know exactly what to do with them. Everything comes together in this production to make it one of the best opera DVDs available. --Joe McLellan