Do You Want More 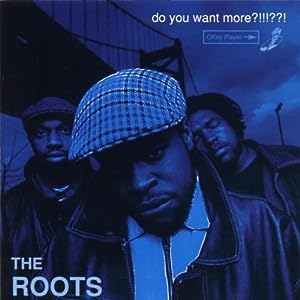 Do You Want More

$6.45
As of 2021-10-27 10:36:42 UTC (more info)
Not Available - stock arriving soon
Buy Now from Amazon
Product prices and availability are accurate as of 2021-10-27 10:36:42 UTC and are subject to change. Any price and availability information displayed on http://www.amazon.com/ at the time of purchase will apply to the purchase of this product.
See All Product Reviews

Typically, we're better off ignoring the boasts of a rapper who claims to describe his own music, but when the Roots' lead voice Black Thought opens up his group's debut album by saying, "You are all about to witness some organic hip-hop jazz," it's a good idea to listen up. Organic is a fitting adjective for a hip-hop crew whose m.o. is as different from the typical studio-locked DJ/MC combo as grass is to Astroturf.

Nothing wrong with a little artificial grazeland, of course, but the Roots are making tasty roughage that blooms into real songs, where raps wind around bass, drums, keys, and horns, and where instruments coil up to voice cadences--where music and lyrics meet and grow together naturally, not coincidentally. You can hear the Roots' heart pump hardest when they pull off the things loops and samples cannot: just check the vocal/instrument interchanges of "Essaywhuman?!!!??!" or the left-turn instrumental digression midway through "Mellow My Man" to witness the living sounds of rap.

The Roots' Philadelphia-based groove collective build slick acid jazz playing around the smooth East Coast rhyming of A Tribe Called Quest and wild West Coast freestyling to create sounds as formless and fluid as jazz, but never unrecognizable as hip-hop. The music picks up where the mad scatting and melodic trills of L.A.'s defunct Freestyle Fellowship left off, and wakes up the tired hype of jazz/rap cross-polination to new possibilities. The roots of this kind of fusion have long been around, though perhaps these Roots are hope for a new dawning. --Roni Sarig

only $3.51
Not Available
View Add to Cart