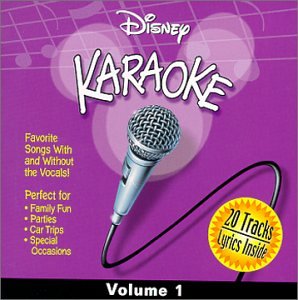 $5.99
As of 2022-11-27 23:49:04 UTC (more info)
Not Available - stock arriving soon
Buy Now from Amazon
Product prices and availability are accurate as of 2022-11-27 23:49:04 UTC and are subject to change. Any price and availability information displayed on http://www.amazon.com/ at the time of purchase will apply to the purchase of this product.
See All Product Reviews

It's safe to assume that every kid in the United States--outside of those raised among fringe groups--grew up harboring fantasies of shoving aside the animated star of the latest hit Disney film and inhabiting the character's cartoon shoes him- or herself, at least until the end credits rolled. Such an assumption is not lost on the clever folks at Disney, who've launched the Disney Karaoke series, consisting of favorites from the company's perennially popular movies, first sung in apple-pure, completely unironic Disney style and then presented instrumentally, giving closet crooners a chance to show their stuff. Highlights on the first volume include 10 songs from 10 films, including "Just Around the Riverbend" (from Pocahantas), "Reflection" (from Mulan), and "A Whole New World" (from The Little Mermaid) as well as the feel-good "Zip-a-Dee-Doo-Dah" (from Song of the South), the infectious and entirely irresistible "Hakuna Matata" (from The Lion King), and the sentiment-stirring classic "When You Wish Upon a Star" (from Pinnochio). Even without the karaoke concept this CD would make lots of can't-miss lists; the song selection alone adds up to pure fun. Even so, Disney, not wishing to disappoint karaoke die-hards, has thoughtfully included complete lyrics in the liner notes. So no excuses for missteps and no more feeling silly--The Jungle Book's "I Wanna Be Like You" actually does include the phrase "Oh, Oobee doo--I wanna be like you." --Tammy La Gorce

The Coolest KIDZ BOP Christmas Ever

Rockabye Baby! Lullaby Renditions of The...

only $9.29
Not Available
View Add to Cart

only $2.38
Not Available
View Add to Cart