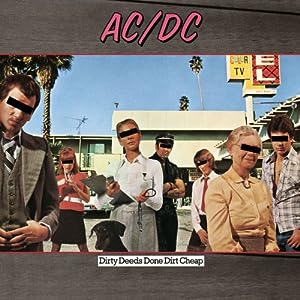 $8.93
As of 2021-12-05 08:12:36 UTC (more info)
Not Available - stock arriving soon
Buy Now from Amazon
Product prices and availability are accurate as of 2021-12-05 08:12:36 UTC and are subject to change. Any price and availability information displayed on http://www.amazon.com/ at the time of purchase will apply to the purchase of this product.
See All Product Reviews

Released in Australia in 1976-but not in the U.S. 'til '81! A tawdry rock classic: the title track plus Big Balls; Problem Child; Squealer , and more.

While Dirty Deeds Done Dirt Cheap sounds like every other AC/DC album, it is distinguished by a lyrical puerility spectacular even by Bon Scott's standards. Two tracks--"Love at First Feel" and "Squealer"--are ruminations on the morality of sex with schoolgirls. "Big Balls," ostensibly a narrative from the perspective of an aristocrat socialite, is actually a somewhat labored excuse for the band to chant "We've got big balls." This juvenile posturing was, to a large degree, AC/DC winding up their burgeoning foreign audience by playing to stereotypical expectations of Australians. On Dirty Deeds, however, AC/DC try too hard. Only on "Ain't No Fun (Waiting Round to Be a Millionaire)" is Scott's laconic wit deployed to real effect: the sheer glee in the line "Get your fuckin' jumbo jet off my airport!" is almost worth the album's purchase price. --Andrew Mueller