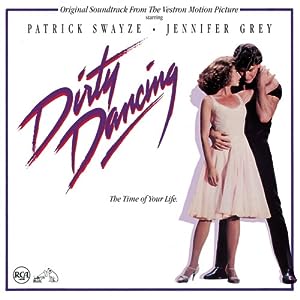 $4.09
As of 2022-08-02 03:30:29 UTC (more info)
Not Available - stock arriving soon
Buy Now from Amazon
Product prices and availability are accurate as of 2022-08-02 03:30:29 UTC and are subject to change. Any price and availability information displayed on http://www.amazon.com/ at the time of purchase will apply to the purchase of this product.
See All Product Reviews

Dirty Dancing Original Motion Picture Soundtrack We receive various CDs from the radio cores that we remanufacture. As a result, we are are now selling them! Our CDs are professionally resurfaced and are guaranteed to work or your money back! These listings are for the disc only and do not come with the case, album art, or inserts. If you have any questions about the CDs, please do not hesitate to get in touch.

If film and music fans sometimes wonder why soundtracks are often little more than pastiches of past pop hits and chart flavors of the moment, it's largely due to the blockbuster success of releases like this collection from 1987's surprise Patrcik Swayze/Jennifer Grey romantic hit. The film's retro-romantic concerns came shrewdly wrapped in a (largely manufactured) dance craze conceit tailor-made for such pop chestnuts as the Ronettes' "Be My Baby," the Zodiacs' "Stay," and the Five Satins' "In the Still of the Night." Mickey and Sylvia once again argued that "Love Is Strange"--if not quite as strained as Swayze's own attempt at balladry, "She's Like the Wind." Eric Carmen's "Hungry Eyes" showcased the former Raspberries leader to good effect, but the real soundtrack sweepstakes winner here was the Jennifer Warnes/Bill Medley duet "(I've Had) The Time of My Life." That performance not only won the Best Original Song Oscar the following year, but became one of the era's most performed songs and a ubiquitous radio staple. --Jerry McCulley

Out of the Blues

only $7.13
Not Available
View Add to Cart

Legends of the Fall