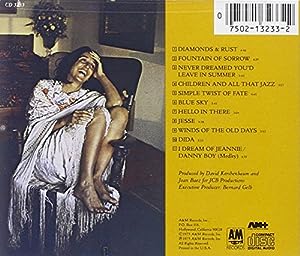 $9.89
As of 2020-09-20 12:06:37 UTC (more info)
Not Available - stock arriving soon
Buy Now from Amazon
Product prices and availability are accurate as of 2020-09-20 12:06:37 UTC and are subject to change. Any price and availability information displayed on http://www.amazon.com/ at the time of purchase will apply to the purchase of this product.
See All Product Reviews

The strongest album of Baez's post-folk career found the singer-songwriter baring her soul about a number of issues in her personal life (both Diamonds & Rust and Winds of the Old Days are about her relationship with Bob Dylan) and also covering songs by her contemporaries. Highlights include her versions of the Allman Brothers' Blue Sky ; Jackson Browne's Fountain of Sorrow ; John Prine's Hello in There , and her duet with Joni Mitchell on Dida .

Perhaps the most outstanding folk album of the 1970s, this collection represents Baez's blossoming from a girlish folk icon into a mature interpreter of folk music. The title track (and, to a much lesser degree, "Dida" and "Children and All That Jazz") showcases her songwriting, but the intimate spin she puts on the music of others is what makes this the remarkable work it is. On Jackson Browne's "Fountain of Sorrow," Dylan's "Simple Twist of Fate" and John Prine's "Hello in There," the purity of Baez's clear soprano (deeper and mellower than on her early albums) expresses the gentle pains of nostalgia and what-might-have-been. The medley of "Jeannie with the Light Brown Hair/Danny Boy" reminds us that no matter what other directions she moves in, Baez will always be a masterful singer of traditional folk music. --Barrie Trinkle --This text refers to the Audio CD edition.

Colors of the Day: The Best of

The Clancy Brothers and Tommy Makem In P...