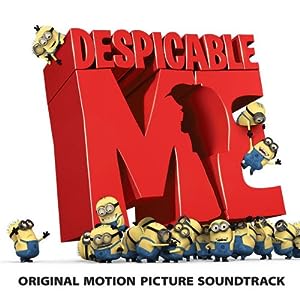 $6.01
As of 2021-07-02 00:00:32 UTC (more info)
Not Available - stock arriving soon
Buy Now from Amazon
Product prices and availability are accurate as of 2021-07-02 00:00:32 UTC and are subject to change. Any price and availability information displayed on http://www.amazon.com/ at the time of purchase will apply to the purchase of this product.
See All Product Reviews

Soundtrack album includes new music by Pharrell, Robin Thicke and others, plus No. 1 classics by The Bee Gees and The Sylvers

Steal the moon? A despicable act...and the obsession of one of the world's greatest super-villains Gru (Steve Carell) in Universal Pictures and Illumination Entertainment's inaugural animated 3-D CGI feature, Despicable Me.

DESPICABLE ME: ORIGINAL MOTION PICTURE SOUNDTRACK, featuring new music by Pharrell, Robin Thicke, Destinee & Paris, and others, plus a pair of classics from The Bee Gees ("You Should Be Dancing") and The Sylvers ("Boogie Fever").

Surrounded by an army of mischievous little minions and armed with his arsenal of shrink rays, freeze rays and battle-ready vehicles, Gru vanquishes all who stand in his way. That is, until the day he encounters the immense will of three little girls who look at him and see something that no one else has: a potential Dad.

In addition to composing the film's orchestral score for the DESPICABLE ME: ORIGINAL MOTION PICTURE SOUNDTRACK, Pharrell also takes the lead on four tracks he wrote and produced, beginning with the title tune, "Despicable Me," and including "Fun, Fun, Fun," "Prettiest Girls," and "Rocket's Theme." With superstar Robin Thicke, Pharrell co-wrote and produced "My Life", and "I'm on a Roll," by sisters Destinee & Paris (formerly of Interscope's Clique Girlz). Pharrell also wrote and produced tracks for the film's mischievous minions ("Minions Mambo", co-written with Lupe Fiasco), and littlest orphan, Agnes ("The Unicorn Song"). The album is rounded out by two vintage No. 1 disco hits from 1976, by The Bee Gees ("You Should Be Dancing") and The Sylvers ("Boogie Fever").