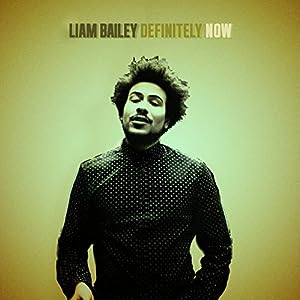 $12.55
As of 2022-09-28 19:56:39 UTC (more info)
Not Available - stock arriving soon
Buy Now from Amazon
Product prices and availability are accurate as of 2022-09-28 19:56:39 UTC and are subject to change. Any price and availability information displayed on http://www.amazon.com/ at the time of purchase will apply to the purchase of this product.
See All Product Reviews

British soul/rocker Liam Bailey's long-awaited debut album, "Definitely Now," combines American R&B, down-home rock-and-roll, transportive psychedelia and blistering blues riffs into a deft personal statement about battling your demons and finding life-affirming joy in music. He sings with a raw expressiveness that has been compared to Bob Marley and Sam Cooke, yet his songwriting style references post punk bands like The Smiths and Oasis. Everything is woven together by a lean guitar-driven instrumental sound, perfectly framing Liam's lyrical and vocal passions. "Definitely Now" was recorded in New York, Miami and London. It was co-written and produced by Bailey, and executive produced by Flying Buddha label head and Executive VP of A&R, Salaam Remi.

Born in Nottingham, England, Bailey got his initial introduction to the music business via his friend, producer Salaam Remi. Remi introduced him to the late Amy Winehouse, who was so impressed with his music that she signed Bailey to her Lioness Records imprint and recorded 2 EP s with him. Liam has collaborated with a wide variety of artists including Rita Ora, Tom Odell and Shy FX. He co-wrote the Chase & Status hit "Blind Faith" which debuted in the top 5 of the UK Singles Charts.

Tour:
-Liam Bailey will be touring the US in the late summer/fall starting with a Central Park SummerStage performance on August 10.

only $2.60
Not Available
View Add to Cart