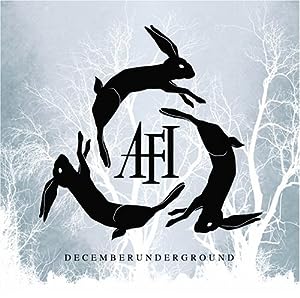 $9.38
As of 2023-01-18 13:40:32 UTC (more info)
Not Available - stock arriving soon
Buy Now from Amazon
Product prices and availability are accurate as of 2023-01-18 13:40:32 UTC and are subject to change. Any price and availability information displayed on http://www.amazon.com/ at the time of purchase will apply to the purchase of this product.
See All Product Reviews

Description of Decemberunderground by Interscope Records

We are delighted to offer the fantastic Decemberunderground.

With so many available recently, it is great to have a name you can recognise. The Decemberunderground is certainly that and will be a excellent acquisition.

For this reduced price, the Decemberunderground is widely recommended and is a regular choice amongst most people. Interscope Records have provided some excellent touches and this equals good value.

Decemberunderground is the long awaited follow up to 2003's platinum breakthrough album Sing the Sorrow. With each new release since their 1991 debut, AFI has delivered the unexpected and have once again defied predictability by infusing new elements into their already uniquely powerful sound. Decemberunderground, produced by Jerry Finn (Green Day, blink-182), is the end result of some two years of hard work by a band determined to reclaim their position as modern rock's preeminent innovators and shows a depth, scope and passion all to uncommon in most contemporary efforts. As one of the most popular groups to emerge from traditional hardcore roots AFI have amassed a die-hard fan base, The Despair Faction, which is nothing short of cult-like and the anticipation they feel for this album reverberates for anyone who is eager to know where rock music is heading. A groundbreaking release, an incendiary live show, a fanatical following. Decemberunderground is here.

As AFI rode onto mainstream radio playlists with their gleaming major label debut, Sing the Sorrow, the rumble of disenchanted fans nearly drowned out that of their dark-hued music. But the heavily-tattooed San Francisco band aren't looking back on Decemberunderground, a slickly-produced, MTV-friendly disc brimming with sinister pop charms. The opening "Prelude 12/21" sets the upbeat tone with handclaps, strings, and a cheeky glam-rock stomp. AFI might still operate in that distinct area where punk, goth, and frightening stadium rock come together, only now they seem intent on crashing the retro '80s party attended by the likes of Franz Ferdinand and the Killers, with flashy tracks such as "Miss Muder" and the synth-heavy "Love Like Winter." "The Interview," meanwhile, is the closest Davey Havok has ever come to crooning a lighter-waving epic. Despite the odd lapse into the Cookie Monster metal territory of their early days ("Kill Caustic," "Affliction"), Decemberunderground is even more ambitious than its predecessor. First comes the backlash, then comes the platinum. --Aidin Vaziri