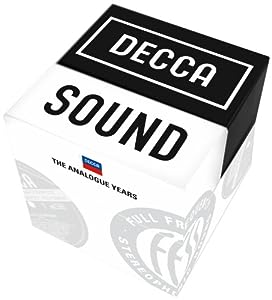 In the late 1940s, the pioneering Decca recording engineers perfected a new set of microphone techniques that allowed the full range of frequencies to be fully heard by listeners for the first time, and the term full frequency range recording was launched. It was a major revolution in sound quality, and the beginnings of high fidelity.

Perfected with the birth of stereo in the mid-1950s, Deccas Full Frequency Stereophonic Sound became a worldwide hallmark of sonic excellence and a golden age of classical recorded music was born. THE ANALOGUE YEARS presents a 50-Album overview across 54 CDs, in original jackets, of the celebrated international recordings that emerged from the London-based record label in that pre-digital era.

Includes Deccas first stereo recordings (1954) and special bonus disc of MONO versions. Many albums include generous fillers. Original cover art used for each sleeve. Multilingual booklet contains articles on the development of ffss, the artists, and the venues. Full recording information on each album and numerous photographs.

Christmas With Elvis And The Royal Philh...

only $5.30
Not Available
View Add to Cart