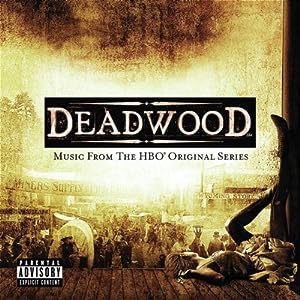 $9.35
As of 2022-11-19 21:10:54 UTC (more info)
Not Available - stock arriving soon
Buy Now from Amazon
Product prices and availability are accurate as of 2022-11-19 21:10:54 UTC and are subject to change. Any price and availability information displayed on http://www.amazon.com/ at the time of purchase will apply to the purchase of this product.
See All Product Reviews

Lost Highway releases the Deadwood Soundtrack, compiling songs appearing at the close of each episode. The soundtrack features an eclectic mix of artist ranging from Sonny Terry and Brownie McGhee to Lyle Lovett to June Carter Cash.

The West of veteran TV writer/Deadwoodcreator David Milch is as grim as it is gritty, sprinkled with salty dialogue and punctuated by sudden brutality and raw sexuality. The original soundtrack cues by composer David Schwartz (represented here by his evocative show theme), Michael Brook and Reinhold Heil and Johnny Klimek play off that vision with often stark rootsiness. But it's the series' rich slate of songs -- choices whose inventiveness often rivals that of The Sopranos -- that consistently reinforce its all-too-human drama, if not the crusty veneer. This collection gathers the best songs from the series' first season, coloring the milieu with evocative hillbilly romps like Michael Hurley's "Hog of the Forsaken" and the a capella grace of Margaret's Native American "Creek Lullaby." But the collection's musical eclecticism stretches far beyond mere genre concerns, variously encompassing the nascent jazz of Jelly Roll Morton (a rollicking "Stars and Stripes Forever"), Delta blues of Bukka White and Mississippi John Hurt and even Gustavo Santaolalla's hypnotic Brazilian fretwork. But the collection's country and folk-tinged performances are its most resonant, whether invoking earthy traditions (the gospel fervor of the late June Carter Cash's "Will the Circle Be Unbroken," Sonny Terry & Brownie McGhee's more heretical "God and Man") or more contemporary stylings like Lyle Lovett's "Old Friend" and the gentle "Twisted Little Man" by Michael J. Sheehy. --Jerry McCulley

Best of the J Geils Band by Capitol