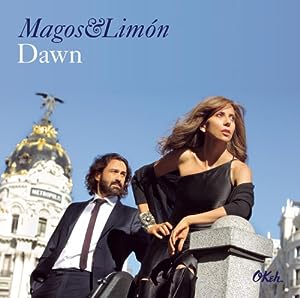 $1.69
As of 2022-11-25 07:31:12 UTC (more info)
Not Available - stock arriving soon
Buy Now from Amazon
Product prices and availability are accurate as of 2022-11-25 07:31:12 UTC and are subject to change. Any price and availability information displayed on http://www.amazon.com/ at the time of purchase will apply to the purchase of this product.
See All Product Reviews

The paring of Magos Herrera and Javier Limón was born out of a riveting duo performance in New York City at a tribute to the legendary Chavela Vargas that Time Out New York called, "Spellbinding." Herrera's smoky, emotional vocals envelop the sobering, intense spirit of Limon's flamenco guitar to produce a melodic sophistication that is altogether haunting. There is a palpable and moving symbiosis that occurs when they perform. On their first album together, Dawn, the pair pay homage to masters like Miles Davis, Chet Baker, Caetano Veloso, Rosa Passos and Bill Evans who have permeated their musical world. Magos & Limón present seminal pieces and contemporary arrangements in a manner that is altogether unique and makes their debut album, Dawn, a cutting-edge, revolutionary approach to flamenco-jazz.

Mexican songstress Magos Herrera is considered one of the most beautiful voices in contemporary Latin American jazz. Her repertoire is filled with yearning romance, intimacy and enchantment. Endearingly referred to as the "Cassandra Wilson of Latin America," (Jazz Times), Herrera is known for her beguiling rhythmic scatting and deeply captivating vocals. She has eight full-length albums to her name, including Distancia which was a #1 jazz album on iTunes and earned a Grammy® nomination for Best Jazz Vocal Album.

Grammy Award® winner Javier Limón has earned a reputation as one of the most sought-after musicians in Spain. The guitarist, composer and producer has worked with an impressive amount of renowned artists including Paco de Lucía, Bebo Valdés, El Cigala and Wynton Marsalis. In 2009, Limón won the Grammy Award® for Best Latin Jazz album for Juntos Para Siempre, a collaboration with Bebo Valdés.