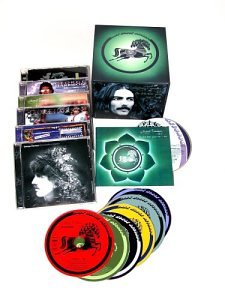 $99.60
As of 2022-09-26 10:58:35 UTC (more info)
Not Available - stock arriving soon
Buy Now from Amazon
Product prices and availability are accurate as of 2022-09-26 10:58:35 UTC and are subject to change. Any price and availability information displayed on http://www.amazon.com/ at the time of purchase will apply to the purchase of this product.
See All Product Reviews

Dark Horse was the label George set up during the mid '70s to put out his solo work, this deluxe boxed set includes all of George's long-unavailable solo albums ( Thirty-Three & 1/3, George Harrison, Somewhere in England, Gone Troppo, Cloud Nine and a hybrid Super Audio CD version of the double Live in Japan album), with bonus tracks on all but the live set and new notes on all. But it's the bonus DVD that makes this set the absolute "perfecta"-containing 89 minutes of promo videos, unreleased live footage and a feature on the Dark Horse label, it's a behind-the-scenes look at a man whose vision and creative energy never flagged.

George Harrison forged the most idiosyncratic, artistically stubborn career of any ex-Beatle. After the spectacular success of All Things Must Pass (whose glorious, Spectorized production Harrison all but disowned in later years), The Concert for Bangla Desh and some tepid follow-ups on the Fabs' Apple label, Harrison released the half-dozen albums contained in this remastered box set on his Dark Horse imprint. Frequently out-of-print and ever under-appreciated, they remain in many ways his truest musical legacy. Powered by a deceptively breezy compositional sense and impeccably tasteful soloing (his fluid slide work remains some of rock's most lyrically distinctive), Harrison variously mixes biting humor ("This Song" answers his "My Sweet Lord" plagiarism suit with sarcastic jabs), a love of pop history (his Motown tribute "Pure Smokey," covers of Cole Porter's "True Love" and Rudy Clark's obscure "Got My Mind Set On You," which became an unlikely late '80s hit), and ever-present spiritual meditations into an often jazzy musical tack that veered sharply away from his Beatles past. And while that laconic sense occasionally goes unfocused (as on "Gone Troppo"), it came to warm fruition on the triumphant Jeff Lynne collaboration "Cloud Nine." Harrison's past glories are revisited on that album's "When We Was Fab" and elsewhere on unused Beatle-era songs ("Not Guilty," "See Yourself"), as well as his tribute to the fallen John Lennon, "All Those Years Ago," but crucially they are always part of a larger, more forceful perspective. His double-live album from a 1991 tour of Japan with Eric Clapton encapsulates that sense, and is featured here in the SACD format with 5.1 surround sound. Also included is a DVD exclusive to this set, featuring highlight footage from those concerts, interviews, and a slate of Harrison videos. --Jerry McCulley

Away From The World

only $3.74
Not Available
View Add to Cart

Shoot Out the Lights