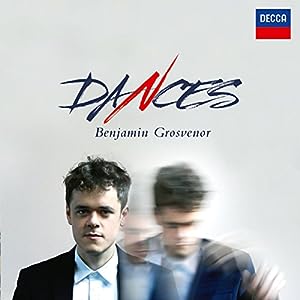 $10.29
As of 2022-09-24 23:04:26 UTC (more info)
Not Available - stock arriving soon
Buy Now from Amazon
Product prices and availability are accurate as of 2022-09-24 23:04:26 UTC and are subject to change. Any price and availability information displayed on http://www.amazon.com/ at the time of purchase will apply to the purchase of this product.
See All Product Reviews

For his second solo album on Decca, Benjamin Grosvenor has assembled a typically imaginative and appealing programme of piano music inspired by the dance form

Dances is a dazzling display of solo works for piano from Bach to Boogie Woogie; via Chopin, Granados, Albeniz, Scriabin and the Blue Danube
Shining the spotlight on the music of movement, this album was inspired by a letter from the great pianist-composer Ferruccio Busoni to his pupil Egon Petri proposing a dance programme as a theme for Petri s recitals, a concept Grosvenor expanded on for his Queen Elizabeth Hall debut recital in 2012

The Bach Partita was marvellously light, Grosvenor s super-dry bass notes acting like the tiny push that keeps the balloon aloft. That dry, plucked bass, placed with perfect precision, came back in Chopin s F sharp minor Polonaise, giving it a superb poise. And the tumultuous octaves that begin the piece had a tremendous thrilling bite. Fire and air are Grosvenor s elements, and under his hands music seems to be made entirely from them. (The Daily Telegraph, review of QEH concert)

Grosvenor is above all a technical wizard, a Harry Potter-like conjuror of the keyboard who can summon breath taking cascades of notes. And yet, unlike other technically brilliant pianists, he does not seem to want to show off. He never bangs, never plays to the gallery, and certainly would not think of breaking into a sweat. (The Financial Times, review of QEH concert)
A former Gramophone Young Artist of the Year, Grosvenor will appearing at two BBC Proms in 2014 with a performance of Chopin s First Piano Concerto with the BBC Philharmonic Orchestra (8th August), followed by a solo recital at Cadogan Hall (1st Sep). In 2011, he was awarded the honour of opening the BBC Proms Concerts season and the youngest-ever soloist to perform on the First Night

only $7.69
Not Available
View Add to Cart