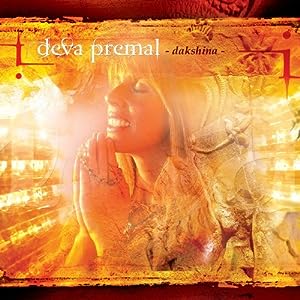 $11.99
As of 2020-09-25 09:08:09 UTC (more info)
Not Available - stock arriving soon
Buy Now from Amazon
Product prices and availability are accurate as of 2020-09-25 09:08:09 UTC and are subject to change. Any price and availability information displayed on http://www.amazon.com/ at the time of purchase will apply to the purchase of this product.
See All Product Reviews

Mantras are rapidly becoming the music of choice for people seeking solace in sound, and Deva Premal, dubbed by one reviewer as "the Enya of mantra," is the voice they're turning to. With close to 400,000 CDs sold worldwide and a buzz of interest from ardent fans ranging from yogis, therapists and alternative health practitioners to Cher and His Holiness the Dalai Lama, Deva Premal and her partner Miten have achieved a huge degree of recognition in the blossoming niche world of yoga music.

Deva Premal's music is driven by a simple yet elegant vision: "everybody with a voice can sing, and everyone with a breath in their body can experience their divinity...we share with others the healing power of music, and the bliss that it brings." The phenomenon of her groundswell of listeners is living proof that mantras are as relevant today as they were thousands of years ago.

Featuring Deva Premal’s transcendent voice layered in a chorus of lush harmonies, Dakshina is a celebration of the divine, perfect for yoga and relaxation.

Chant is a new marketing niche in the alternative music scene, and swings from albums of straight recitations to a glut of electronica mantra CDs. A group like Rasa turns chants into cinematic excursions. Singer Donna DeLory recasts chants as pop hooks and Krishna Das growls them into guttural ruminations. But the German singer Deva Premal was doing the mantra thing long before it became a commercialized trend.

On Dakshina, Premal, along with her partner, guitarist Miten, converts chants into serene, almost easy-listening refrains. Premal has a warm alto that she deploys on rhythm-free chorales of Enyaesque vocal layers to downtempo, world-beat grooves. With her chants harmonized and repeated into infinity, the effect can be like an ocean surface. It's constantly flowing and in motion, but doesn't have a lot of focus. But on songs like "Guru Rinpoche Mantra" or "Homage to Krishna," a wave rises and carries you down its face in a slo-mo free fall. Premal keeps it mostly acoustic, filling in ornamental lines with acoustic guitar, tamboura, and bansuri flutes. Only the orchestral strings occasionally get in the way. Her previous albums have often been sappy in their new age aspirations, but on Dakshina, she's more naked, stripping her sound down to a deeper emotional core. --John Diliberto

Leon Fleisher: All the Things You Are