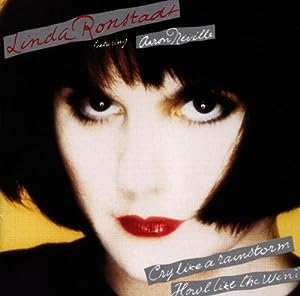 $39.43
As of 2022-11-27 23:02:15 UTC (more info)
Not Available - stock arriving soon
Buy Now from Amazon
Product prices and availability are accurate as of 2022-11-27 23:02:15 UTC and are subject to change. Any price and availability information displayed on http://www.amazon.com/ at the time of purchase will apply to the purchase of this product.
See All Product Reviews

An album that defines virtually everything that is right about adult contemporary pop--and yes, there are a few things--Cry Like a Rainstorm, Howl Like the Wind contains lush, orchestrated arrangements of songs by first-rate tunesmiths such as Jimmy Webb, Eric Kaz, Paul Carrack, Barry Mann and Cynthia Weill, Isaac Hayes, and Karla Bonoff. Four cuts, including the Grammy-winning "Don't Know Much," feature duets between Ronstadt (still singing with power and assurance even at the top of her range) and angel-voiced Aaron Neville. Other highlights include "Adios," with multitracked background vocals by Brian Wilson, and the title song, which is driven to new heights by the Skywalker Symphony Orchestra and the Oakland Interfaith Gospel Choir. Beautiful stuff. --Daniel Durchholz

only $2.03
Not Available
View Add to Cart

Davi Sings Sinatra: On The Road To Roman...