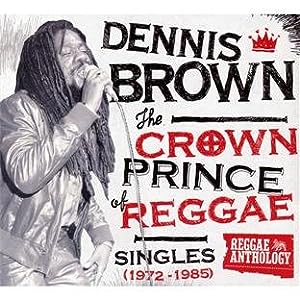 $11.81
As of 2020-11-24 05:51:05 UTC (more info)
Not Available - stock arriving soon
Buy Now from Amazon
Product prices and availability are accurate as of 2020-11-24 05:51:05 UTC and are subject to change. Any price and availability information displayed on http://www.amazon.com/ at the time of purchase will apply to the purchase of this product.
See All Product Reviews

The legend of Dennis Brown lives on. Selected as one
of National Public Radio s 50 greatVoices in 2010, music fans of all stripes were
introduced to his golden voice in the company of Nat Cole, Johnny Cash and other
iconic musical figures. Dennis Brown is the archetype of reggae vocalists. His unique,
soulful sound earned him legions of fans during his lifetime including Bob Marley who
rated Dennis Brown as his favorite singer. Since his passing in 2000, his songs have
continued to play in dancehalls and on radio. Now, this deluxe package pays fitting
tribute to this great artist.
The bonus DVD presents Dennis Brown in concert backed by Lloyd Parks &We the
People Band in a 1979 performance and offers up eight additional hits not included on
the audio discs,
48 Denis Brown hits in one deluxe collector s package
Liner notes written by journalist CarterVan Pelt
Rare photos courtesy of Dennis Brown Estate
Crown Prince of Reggae is a singles collection of hits released between 1972 and 1985.
It is a companion package to the best selling Love & Hate, presenting the very
best of Dennis Brown.

only $7.62
Not Available
View Add to Cart