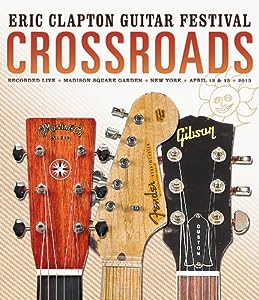 $10.69
As of 2023-01-17 23:29:14 UTC (more info)
Not Available - stock arriving soon
Buy Now from Amazon
Product prices and availability are accurate as of 2023-01-17 23:29:14 UTC and are subject to change. Any price and availability information displayed on http://www.amazon.com/ at the time of purchase will apply to the purchase of this product.
See All Product Reviews

With so many available today, it is good to have a make you can trust. The Crossroads Guitar Festival 2013 is certainly that and will be a great buy.

For this reduced price, the Crossroads Guitar Festival 2013 is widely recommended and is a regular choice with most people. Rhino have added some excellent touches and this equals great value for money.

For the first time ever, audio highlights from the festival will also be released on CD and digitally, featuring 32 tracks.

In addition to rousing performances of blues classics and renowned hit songs, many of the most memorable performances saw artists coming together for some stirring collaborations. Among the highlights were the surprise pairing of John Mayer and Keith Urban for the Beatles' "Don't Let Me Down," Vince Gill and Clapton taking on "Lay Down Sally," Keb Mo and Taj Mahal covering the Sleepy John Estes' song, "Diving Duck Blues," Gill performing "Tumbling Dice" with Urban and Albert Lee and members of the Allman Brothers - Gregg Allman, Warren Haynes and Derek Trucks - joined forces for a haunting acoustic cover of Neil Young's "The Needle and the Damage Done."

As you would expect, Clapton features prominently throughout the show, including with his own band for "Tears In Heaven." The legendary guitarist also tore through the Derek and the Dominos' classic "Why Does Love Got to Be So Sad" with the Allman Brothers Band, revisiting the time in 2009 when he joined the band during their annual residency at the Beacon Theater in New York.

Blow Your Face Out