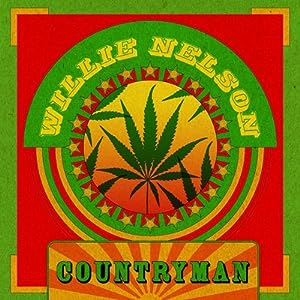 $12.88
As of 2022-01-08 17:46:05 UTC (more info)
Not Available - stock arriving soon
Buy Now from Amazon
Product prices and availability are accurate as of 2022-01-08 17:46:05 UTC and are subject to change. Any price and availability information displayed on http://www.amazon.com/ at the time of purchase will apply to the purchase of this product.
See All Product Reviews

After nearly a decade of gestation, Willie Nelson's long-lost first reggae set is at last complete. The seed of this project took root in late 1995, sprung from the mind of famed producer Don Was. Countryman is Willie's impassioned tribute to the upstroke sound of Jamaica, an Ire voyage to the land of dub and dreadlocks. Willie takes a handful of his own classics and filters them through a reggae prism, peppering them with his nylon acoustic guitar, pedal steel, dobro, harmonica and the familiar comforts of country, while bringing drums and bass to the forefront, yard style. Willie also tackles a couple of reggae classics from the acclaimed Jamaican film soundtrack The Harder They Come, including the title track and 'Sitting in Limbo'. Reggae star Toots Hibbert also guests on the Johnny Cash cover 'I'm A Worried Man'. In short, after a decade long journey, Willie's Jamaican vision at last sees the bright light of day. If last year's collaboration with Toots Hibbert on Toot's True Love album ('Still Is Still Movin' To Me') is any indication, we are in for a treat. Lost Highway. 2005.

What's stranger: Willie Nelson singing lilting reggae melodies, or a Jamaican chestnut like "The Harder They Fall" set to an acoustic country arrangement, complete with Dobro? Given Nelson's well-publicized taste for ganja, it's not surprising he's also fond of the island's major musical export. The genre-straddling Countryman, replete with dub effects, skanking beats, ringing steel guitars, and Nelson's signature nylon-string picking, doesn't measure up to his earlier, artful Lost Highway releases. It's easy to understand why this project was shelved by Nelson's previous label for nine years. There are no musical sparks, and the buoyant rhythms trivialize the strong lyrics of Nelson classics like "Darkness on the Face of the Earth." But his voice is still mellow gold, and there are tunes--like his duet with reggae/R&B singer Toots Hibbert on Johnny Cash's "I'm a Worried Man" and his own somber reading of Jimmy Cliff's "Sitting in Limbo"--that tap into the souls of desperate men to extol the power of faith over adversity. Nonetheless, this one's for hardcore fans and completists only. --Ted Drozdowski

In Concert: Best of