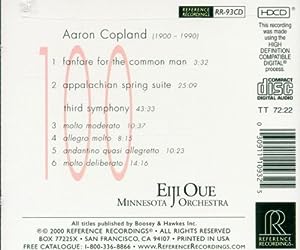 $13.04
As of 2021-07-30 21:39:29 UTC (more info)
Not Available - stock arriving soon
Buy Now from Amazon
Product prices and availability are accurate as of 2021-07-30 21:39:29 UTC and are subject to change. Any price and availability information displayed on http://www.amazon.com/ at the time of purchase will apply to the purchase of this product.
See All Product Reviews

This release--part of a wave that will soon grow tidal in honor of the 100th anniversary of Aaron Copland in 2000--doesn't exactly rewrite the map on America's beloved composer. It collects three of his most familiar works created during (and, in varying degrees, reacting to) his country's experience of World War II: the version of "Appalachian Spring" for orchestral suite, the "Fanfare for the Common Man," and the Third Symphony (which incorporates the fanfare in its final movement and, as Copland himself wrote, reflects the "euphoric spirit of the country" following the war's conclusion). But the charismatic Eiji Oue proves to have a convincing and sensitive connection to these works.

A protégé of Leonard Bernstein, Oue was bequeathed the baton used by Bernstein in his final concert--the musical equivalent of a laying on of hands--and he opts to bring out a similar kind of multilayered American Romanticism, mixing transcendentalist vision with sinewy, driving vitality. The range of color and deep focus Oue elicits from the Minnesota Orchestra give yet another example of how the old "tier" hierarchy of American orchestras is eroding; there are excellent, tender wind solos, nicely balanced bodies of strings, and pulse-raising brass, especially in the Third. Oue finds a way to make the transitions between tempos and sections breathe effectively (above all when the music shifts to a faster gear), and his fine ear does justice to the vertical density of Copland's sound--as does the justly acclaimed Reference Recording range of clarity. While Oue doesn't really break any new interpretive ground (his Third feels too close in overall concept to Bernstein's own canonical recording--down to following the cut of several measures of triumphant D major on the score's final page), the glory of that ear-delighting dynamic range and subtlety is a definite advantage for audiophiles. --Thomas May