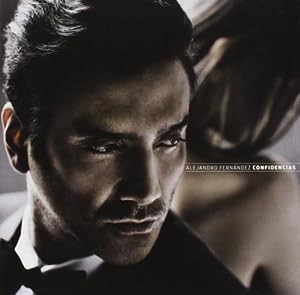 $11.02
As of 2023-01-25 07:22:57 UTC (more info)
Not Available - stock arriving soon
Buy Now from Amazon
Product prices and availability are accurate as of 2023-01-25 07:22:57 UTC and are subject to change. Any price and availability information displayed on http://www.amazon.com/ at the time of purchase will apply to the purchase of this product.
See All Product Reviews

International superstar Alejandro Fernandez is back with his new studio album, Confidencias . The album includes 11 timeless Latin American standards all recorded with Alejandro s incomparable unique style, under the production of the late legendary producer and musical prodigy Phil Ramone (Billy Joel, Frank Sinatra, Ray Charles, Rod Stewart and Elton John among many others). Confidencias also features internationally renowned recording artists including Christina Aguilera on the album s lead single Hoy Tengo Ganas de Ti , Rod Stewart on a bilingual (Spanish and English) version of Jimmy Cox s Nobody Knows You When You re Down and Out and Alejandro s father, legendary Mexican music superstar Vicente Fernandez, in an epic take of Julio Iglesias classic Me Olvide De Vivir.

Alejandro Fernandez has sold over 30 million albums worldwide. Has accumulated an impressive number of awards and recognitions, including 3 GRAMMY Award nominations, 2 Latin GRAMMY Awards, and a star on the Hollywood Walk of Fame.